Just a quick update on my painting activities which have been severely curtailed by work and other life commitments. Due to such little time to paint but still containing the desire to game I decided to speed paint my Valiant Germans.

It has been an interesting experiment with so far three colours on the figures slapped on with a huge Humbrol size 6 brush... not pretty. 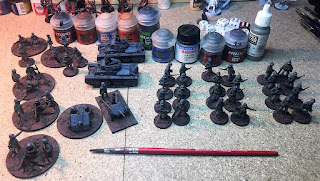 Next stage is a wash of nuln oil and then the flesh will be applied. The final stage will be re touching the uniform and equipment. Hopefully these guys will be useable and give me the starting point of having a British and German force. Already I have a little list of desired vehicles from Frontline and Grubby and of course... more figures!

Next week I will begin a few buildings in 20mm which is a scale that I have never had much success in previously but I do need some houses for the guys to shelter in and fight over.

Keep Blogging.
Posted by Solo wargaming-on a budget! at 03:27 7 comments: