Well after a brief intermission from painting I have had a good old fashioned clear out. In fact it was so good that I will shortly be left with just the one army (gasp) a Perry Wars of the Roses era bunch of figures based singly. It was literally amazing to find drawers full of old paints-enamels that had not been used nor ever to be used again...20MM plastics...bits of wood kept for a purpose long forgotten. Anyway the lot went in the bin.

During the clear out I decided to make a new paint rack. This had the potential to end up like Homers spice rack... 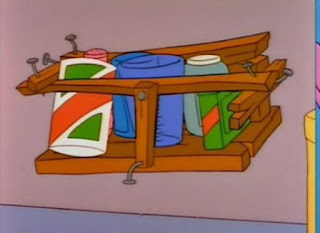 Anyway with just the jaw bone of an ass the rack was completed and now houses a mere 145 pots of paint plus a few sundries. First thing I googled last night was the paints on my wish list! 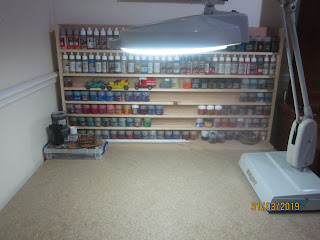 The new table top is a whopping 24"X33" which if I keep tidy should be large enough to paint on. There are three model cars on the shelves which should give a clue as to the next project which has been subject to meticulous military style planning. No expense has been spared on forming army lists and terrain needs... now it just has to get passed the chancellor ie. my better half.

Just incase no one has come across the Lead Adventure Forum please give this website a look. It is a mine of useful information and helpful people. Currently I am attempting to scratch build a couple of 18 Pdr field guns and the help has been tremendous.

The workmanship of some of the guys is astounding-in cardboard-I just want a passable gun on the table and I will be happy and will have saved £30 or more!

Keep blogging Guys next installment will be a pile of figures!