Sat at home infront of my humble hearth with logs blazing. Time team has just been on and my son is playing super Mario cart...lifes good. It has potential to improve (vastly) as I have been on the Hat website for the first time. I've had a beer or two but for the life of me I cant remember ever seeing anyone use these figures for wargaming-not even the 28mm stuff which looks excellent. Is there a problem with them?
Oh well I have food for thought on 2011 and a full project, at least this part of wargaming (one of the best bits by the way) costs nothing! Maybe WW1 in 20mm plastic? I dont think I can wait much longer for 28mm WW1 in hard plastic...have fun yourselves dreaming of new miniature campaigns and heres to a good 2011!!!!!!!!
Posted by Solo wargaming-on a budget! at 12:29 No comments:

Historical research I tell you!

Hi,
I was browsing through the Hendrickson family library (in my mind a vast room adorned with tiger skin rugs, large armchairs and roaring fire place-not just a drawer!), and found some photos. In almost every conflict since the civil war my relatives have been serving and falling like lemmings, you'd think that a quick appraisal of our family history would have put my forefathers off but they are obviously made of thicker stuff!
Most of the faded pics have a name and some of them have a date of death scribbled on the back but one photo is worthy of further examination. Its not of my great grandfathers or uncles but of a rather sexy girl wearing her boyfriends/husbands uniform, now I dont care what relative she was she would get it. Sorry to be so base...but there it been said. 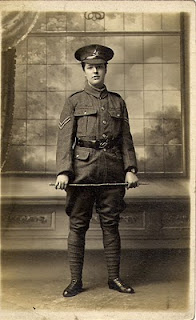 OK its wierd on a lot of levels.not what one usually thinks of when researching solo wargames-or is it?
Posted by Solo wargaming-on a budget! at 11:44 No comments:

I have been looking back at what I painted in 2010....there seems to be no logic in what I paint, maybe its because I have'nt had a project since my wife and son died? 2011 will hopefully bring more stability and a more focused approach to my painting and gaming! DBA is definatley on the cards as my son who is now 8 is rather good at it. 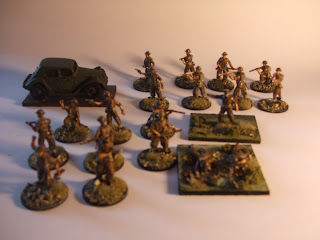 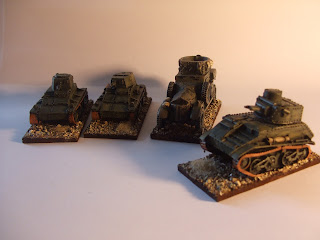 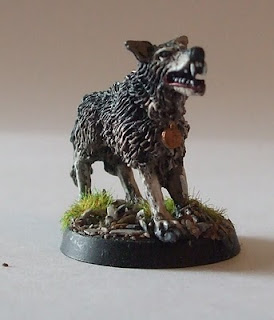 Posted by Solo wargaming-on a budget! at 08:54 No comments:

Merry happiness and all that to anyone who pops by. I'm rather excited with all the new plastic releaes that are planned. I must admit to liking Irregular miniatures...and so it follows that I rather like wargames factory...there is something imperfect (human) about the castings that make them...well human. I must buy some Irregular figures to add to my armies, they produce some real oddball stuff, the dancing bear is joining my medievals for no reason at all.
So what are you chaps up too? New year and new project for all of us? Plastic ECW for me, I will be at Vapnartakto buy some supplies and meet fellow gamers-any one else going?
Oh well I'm off to get drunk.
Posted by Solo wargaming-on a budget! at 10:19 No comments: 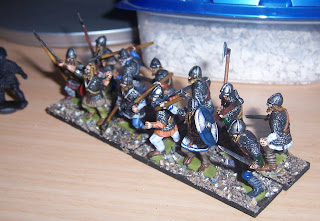 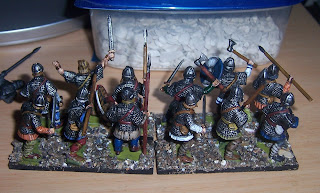 Vikings without shields! I blame the beer and Colin...this is a work in progress...
Posted by Solo wargaming-on a budget! at 10:07 No comments:

The view from my bedroom window is a scene from Narnia, pure white snow over the fields for miles, very inspiring. So inspiring in fact that for the first time in months I painted some figures. Three Gripping Beast plastic Vikings got a coat of paint and some ink, indeed I have not painted for so long I was worried they would look totally pants but in fact they are passable.
On the subject of plastics I waited for years for plastic historicals only to be very disapointed by what was offered. Wargames factory zombies were awful (I still have bought two packs though) and the Perry twins made their figures a miniature form of torture with far too much detail on sculpts that were too small.....
Things are improving though, Gripping Beast figures are more sensible in size and detail than any other manufacturer-though if the Perries were to produce some first world war figures in plastic I would forgive them. The perfect plastic figure to my mind would be Copplestone as his works are masterful, Chinese for the Back of Beyond please Mark.
I will put a pic up of the three Norsemen later-how does any one base them? I dont play WHAB so advice would be good-single bases or go for the multi based diorama look with a 20mm frontage?
Oh well I'm off to dig the snow away from the car....humbug!
Posted by Solo wargaming-on a budget! at 01:43 No comments:

Hi All,
this is a running commentary on my passion which is painting and gaming with model soldiers. Not exactly a Rambo type of pastime but I'm at ease with who I am and what I enjoy doing! If playing a wargame with small models that took weeks to paint was not hard enough I seem to have added to the complexity of it all by wargaming solo.
I do not shun the company of other gamers it just that I want to explore what is reasonable-I dont want to play a game where winning is the aim. Victory in a wargame is recreating what is plausable within the choices we make not actually who wins. Playing solo also allows me to create terrain and develop unit histories as there is no rush to play with an opponent...
I did have another blog "Solo Wargaming" but computer gremlins slayed it which is a pity because I enjoyed looking at the work of others which was always inspiring. By the way my profile picture is my girlfriend, I really look nothing like the profile pic!
Posted by Solo wargaming-on a budget! at 08:35 No comments: