I have had a beano painting my Germans up and they are now finished though obviously I could use a few more units. This week also saw an old Grima Wormtongue get a coat of paint-he is my only LOTR figure, this was a range I was not interested in despite the books and films though my resolve is weakening because of The Hobbit!

I am sorry about the photo quality (or lack of) this is really something I intend to conquer this week and I have begun to make a little "cabinet" to capture the light and put a backdrop in. Udates shortly.

The Germans are Warlord plastics except for the HMG and Mortar who are from crusader as are the resin bases. Thanks for looking and keep blogging as I steal your ideas! 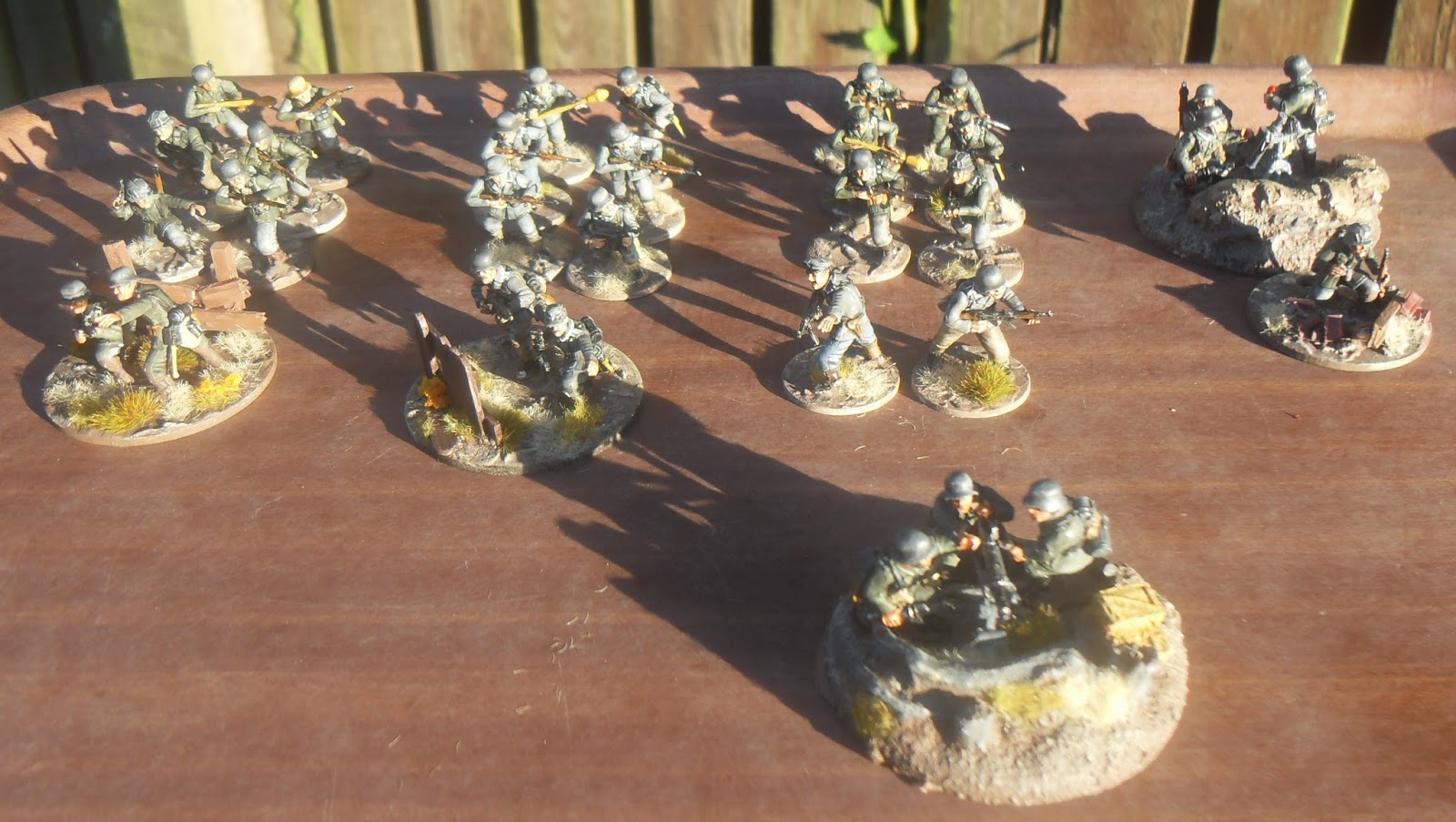 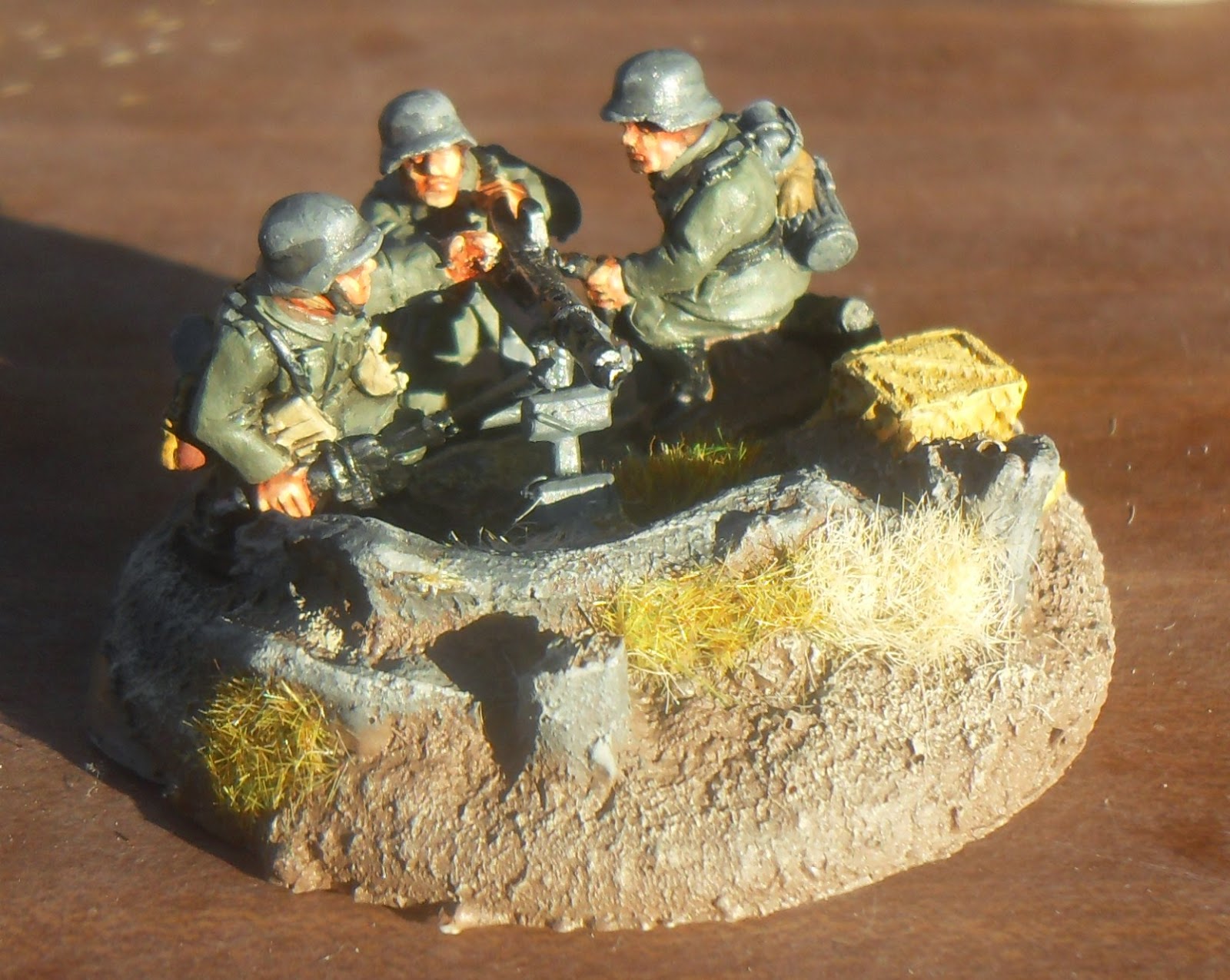 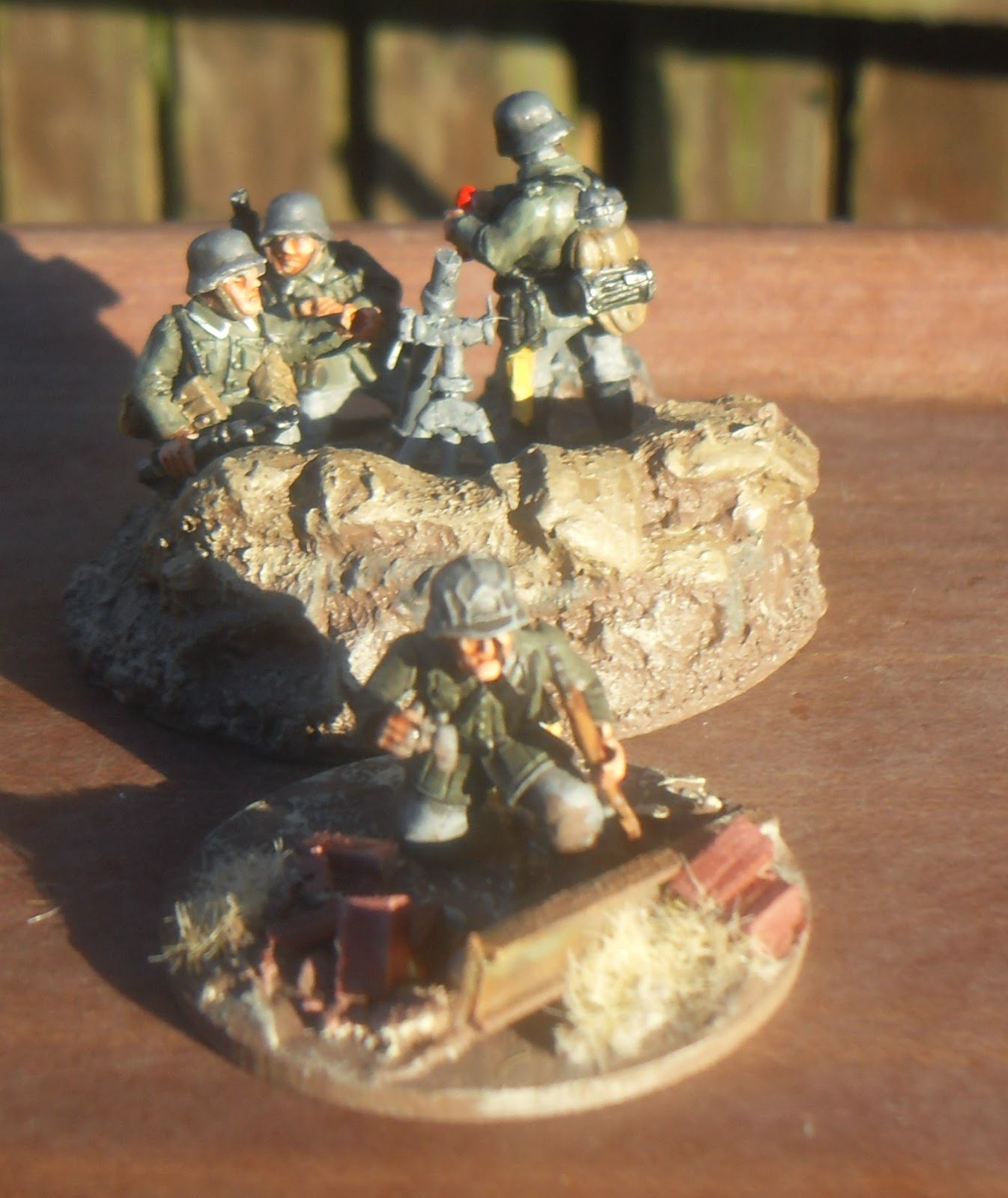 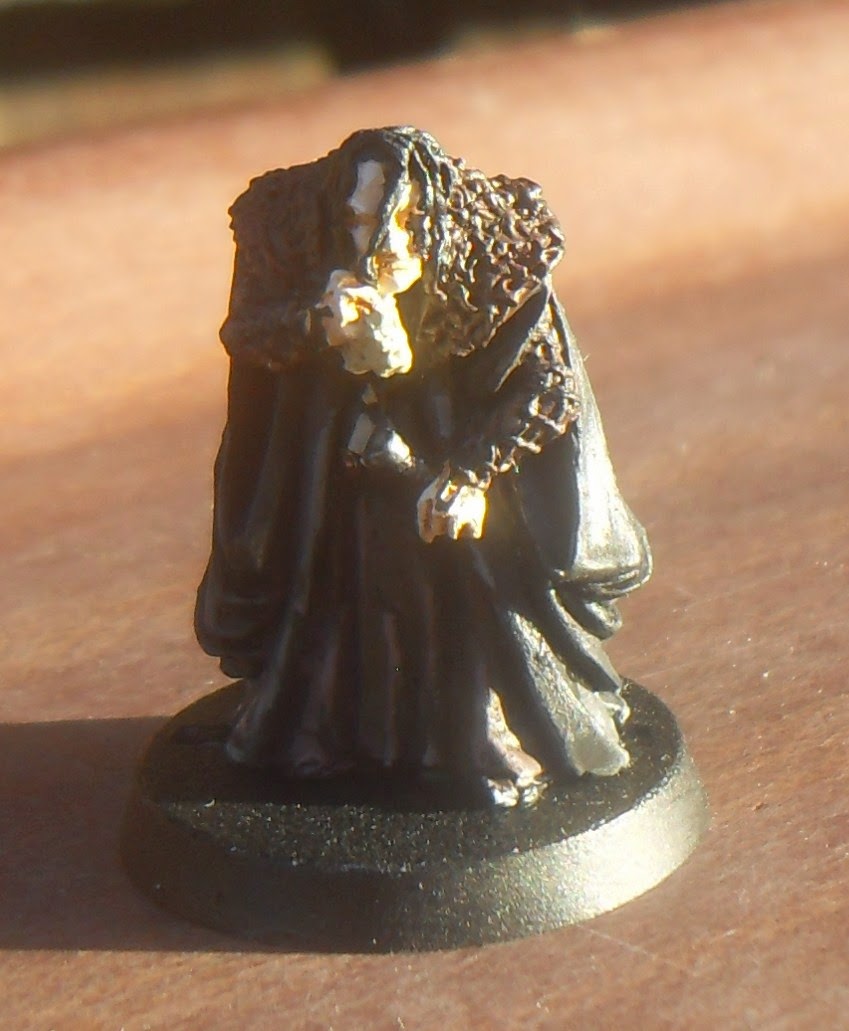 A rare Monday morning post but I just wanted to pop a few pictures of the scratch build from Friday night onto the blog and also mention the Plastic Soldier Company.

having only recently discovered the excellent Bolt Action rule set I am in the (expensive for me) process of building two opposing forces, German and Russian. The Russians have come via The Plastic Soldier Company and are amazing value for money. I was expecting very dodgy models because they were so cheap but actually the quality and quantity is just amazing-probably the best money I have ever spent in this hobby.

This company deserve to do well and maybe they will even release other nations in time?

As for the drunken scratch build it is a very simple foam card shape with a pair of pillars that I bought from ebay...they were literally pennies...the paint used on this are all tester pots from the DIY stores, chocolate brown being the most useful as I use it on all my bases. There are still a few spots to repaint and I will put some dull colours on the interior walls. I plan to make a few more as they should help fill up my table nicely. 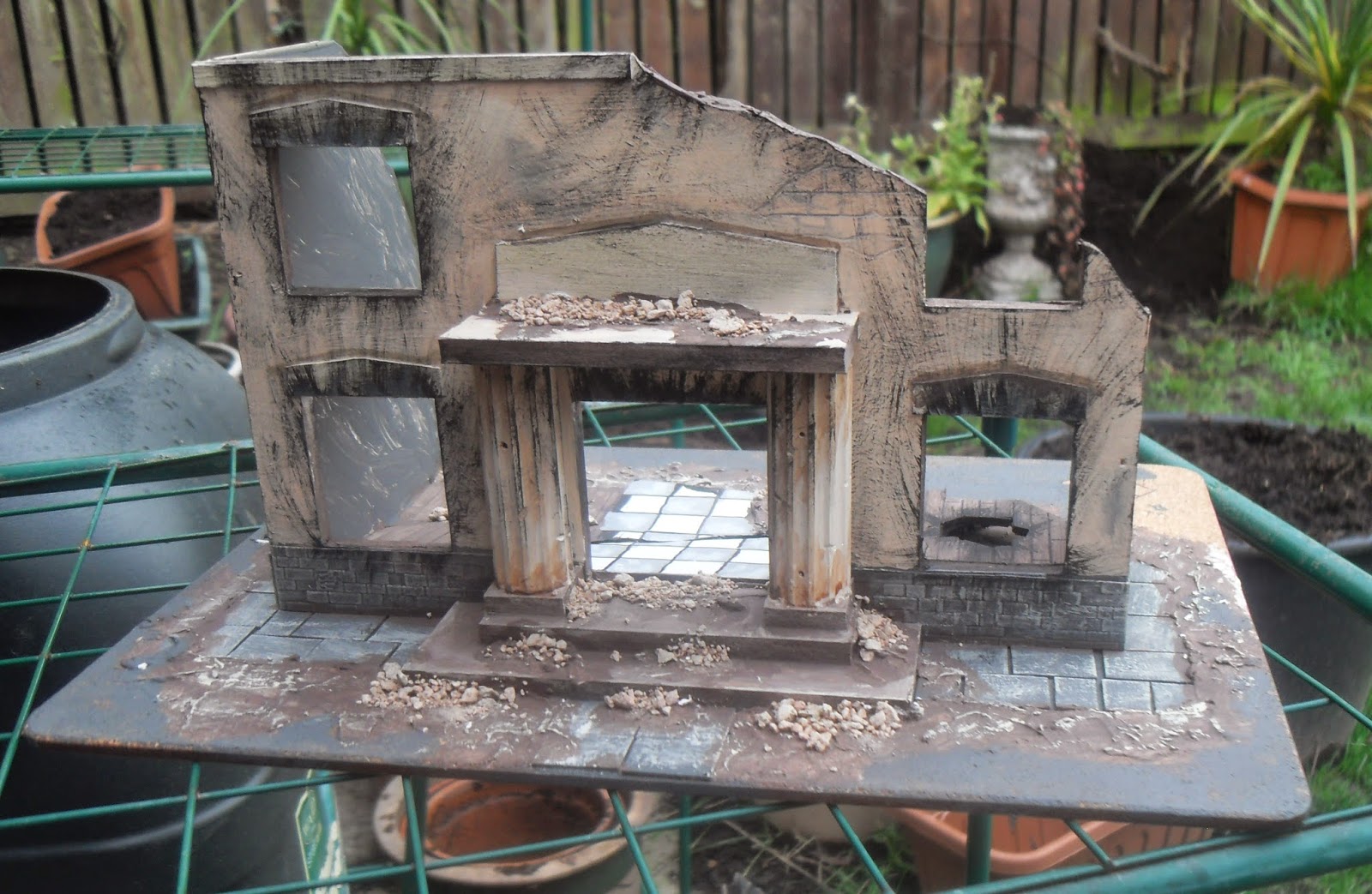 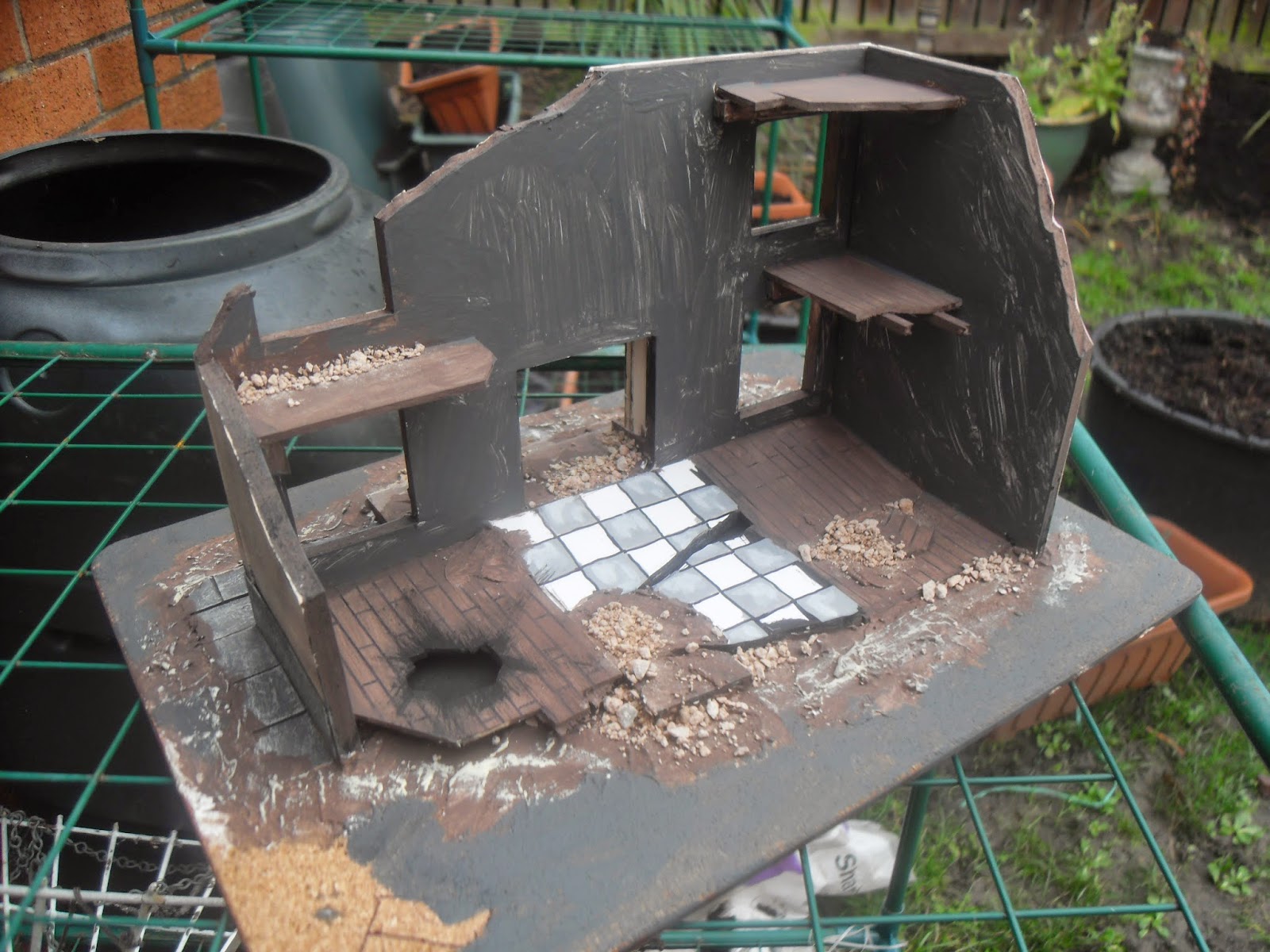 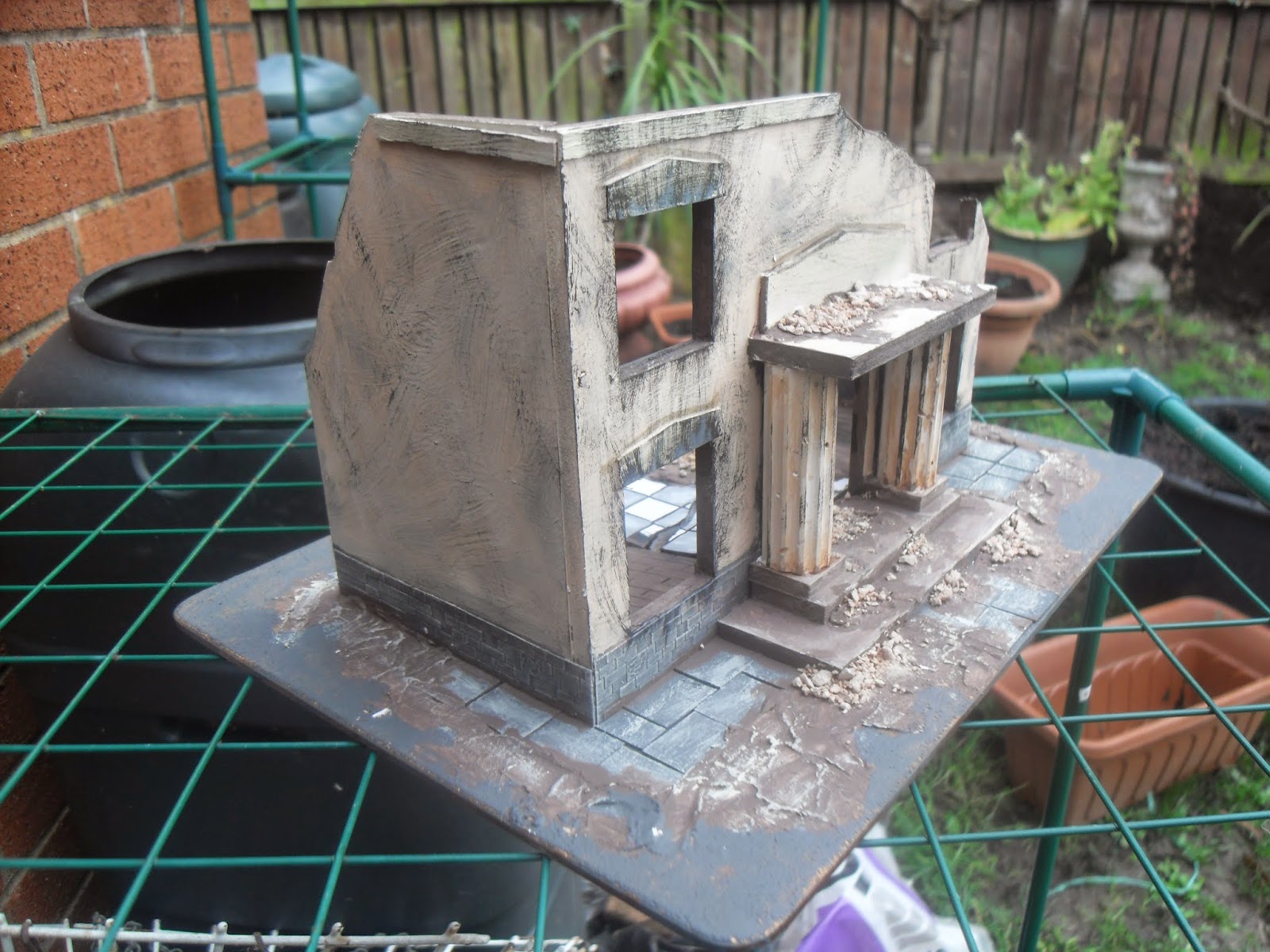 I am a happy man. Not just because I stayed up late doing something I love alone! (Scratch building!!). Also because my order from Crusader Miniatures and The Plastic Soldier Company arrived. Excellent service from both, PSC managed to get my order to me within 2 and a 1/2 days and Crusader Mini's sent me a free teabag(?)...oh and the quality of both are just astounding.

The Sponge Bob record keeps playing in my head..."Best Day Ever", partly because it was 1AM before I finished sticking and gluing and drinking beer. It's great to nerd out in style.

Oh wait having just taken a few pics I have just seen the downside-MY DESK! Clutter and untideyness is my pet hate, I swear that I spend more time cleaning my painting station than actually painting on it...oh well I will clear up before starting the Russians. I sincerely hope that you Chaps have as good a night and day as I have.... 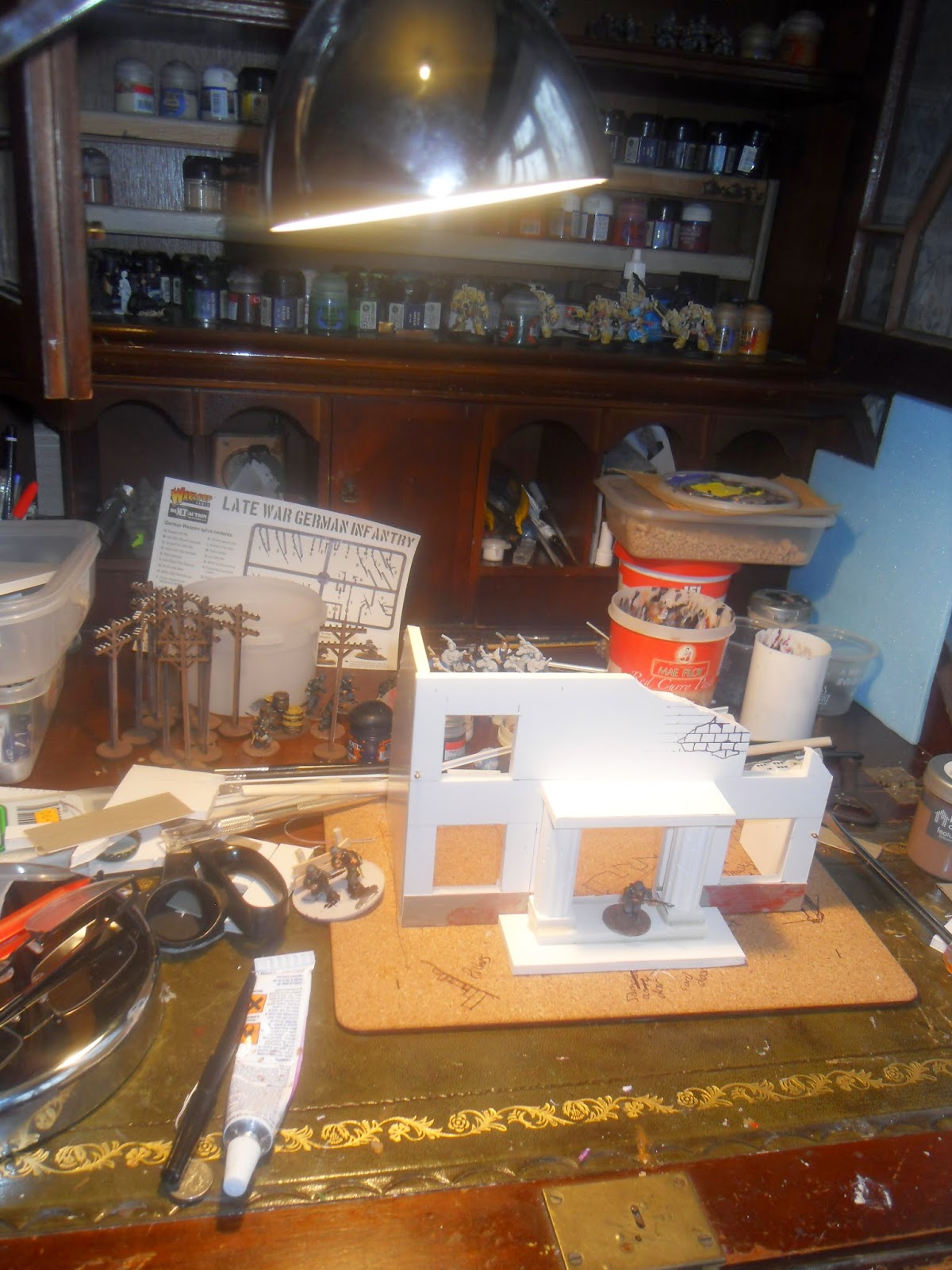 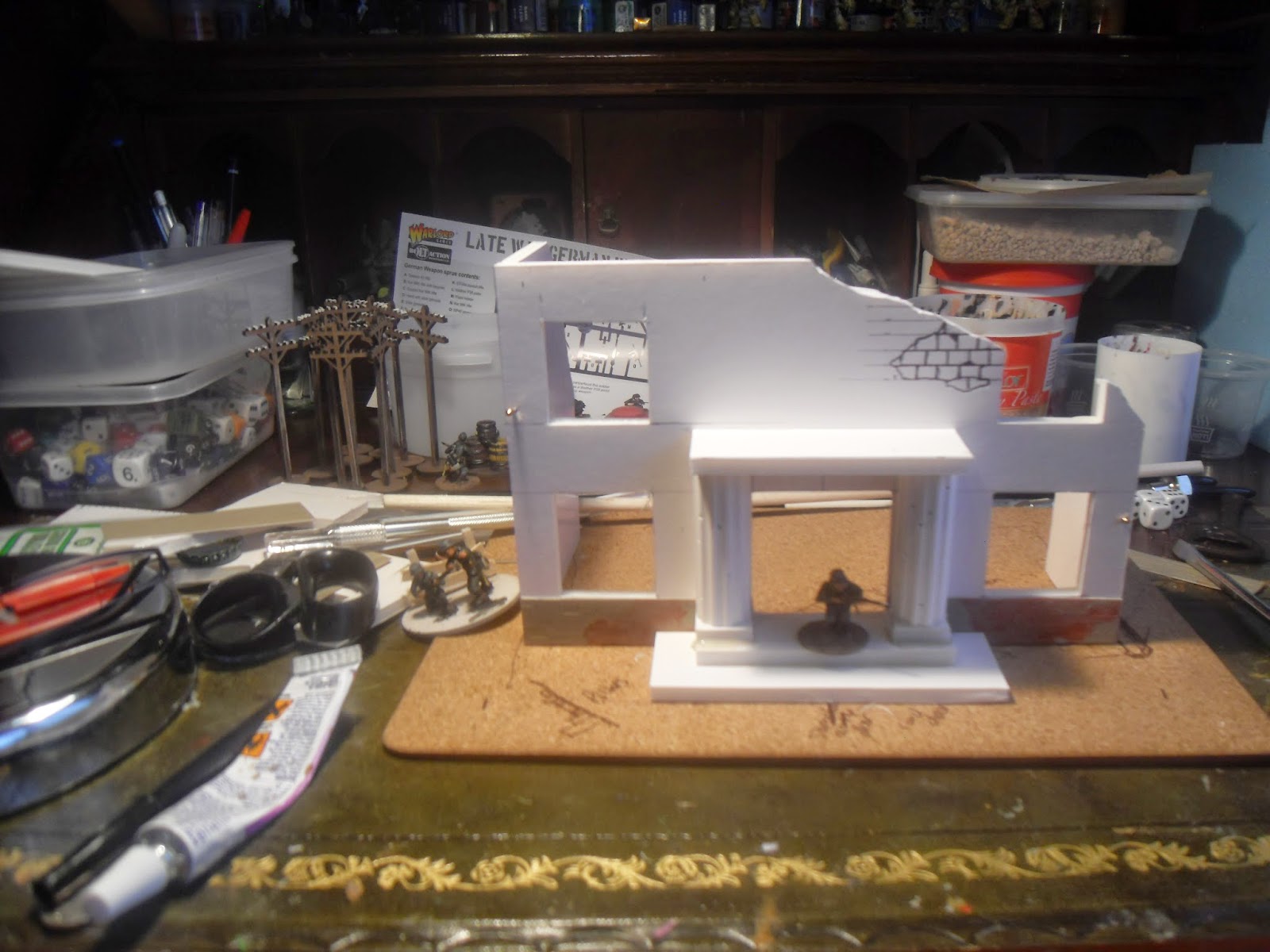 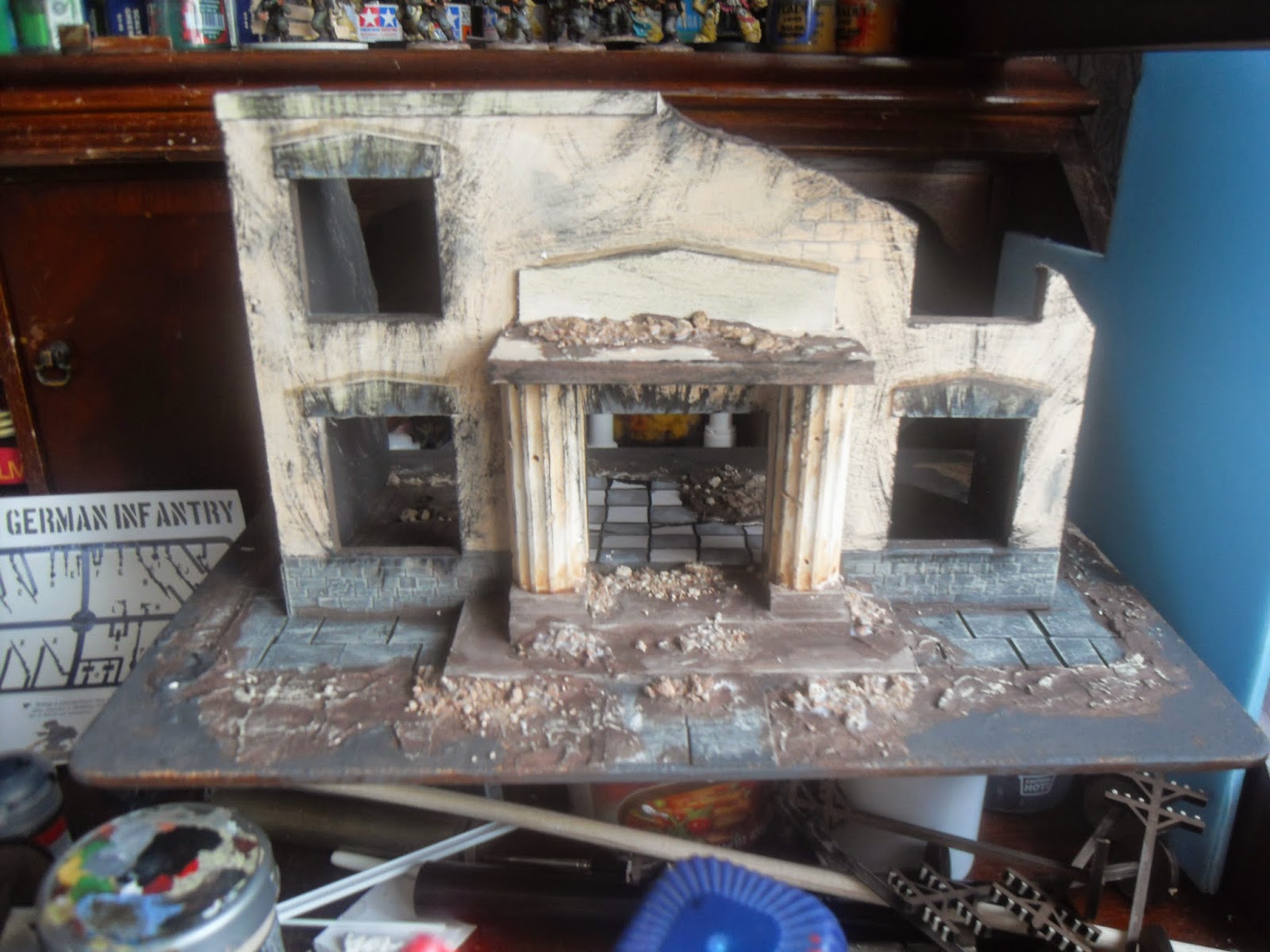 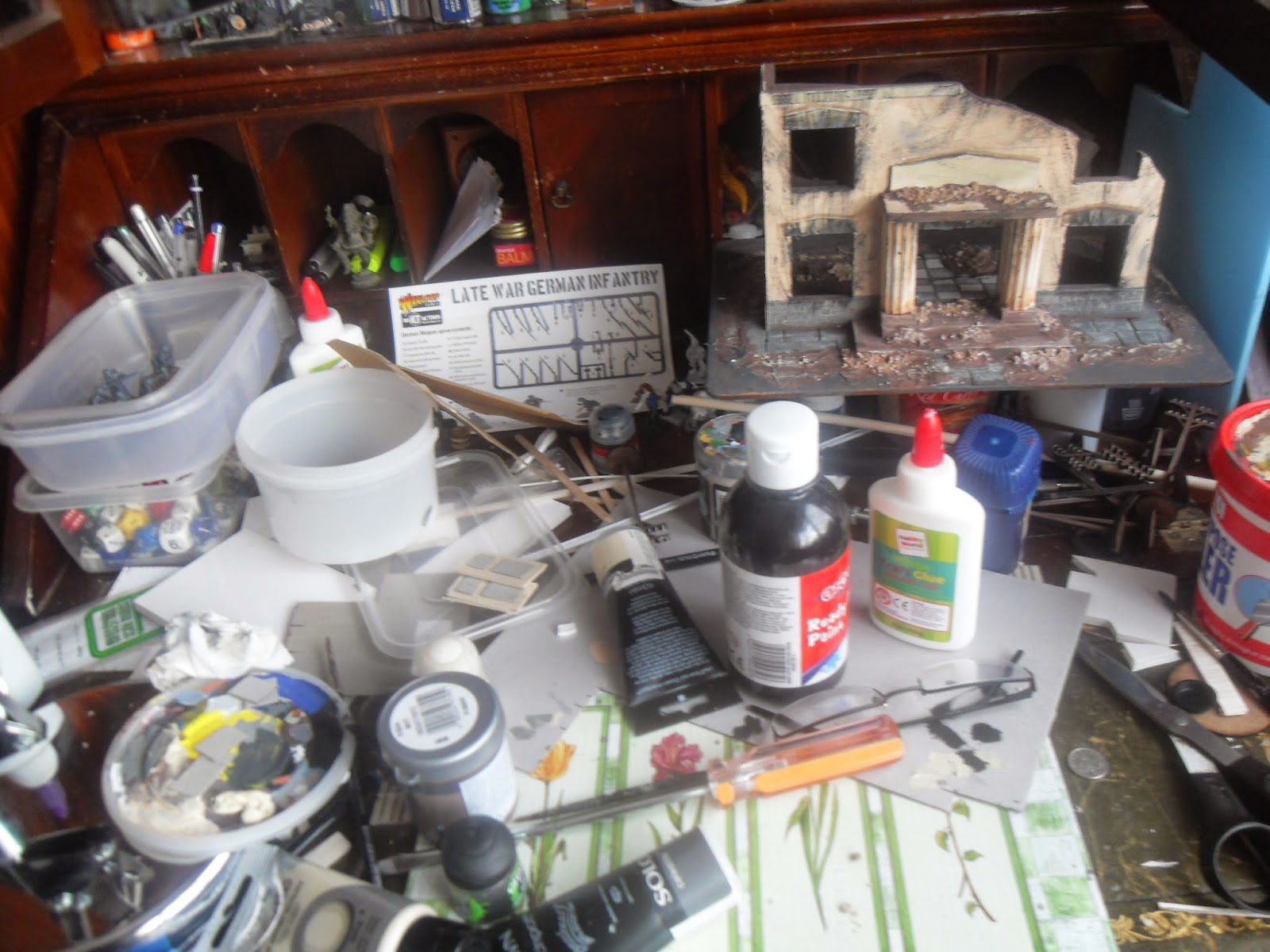 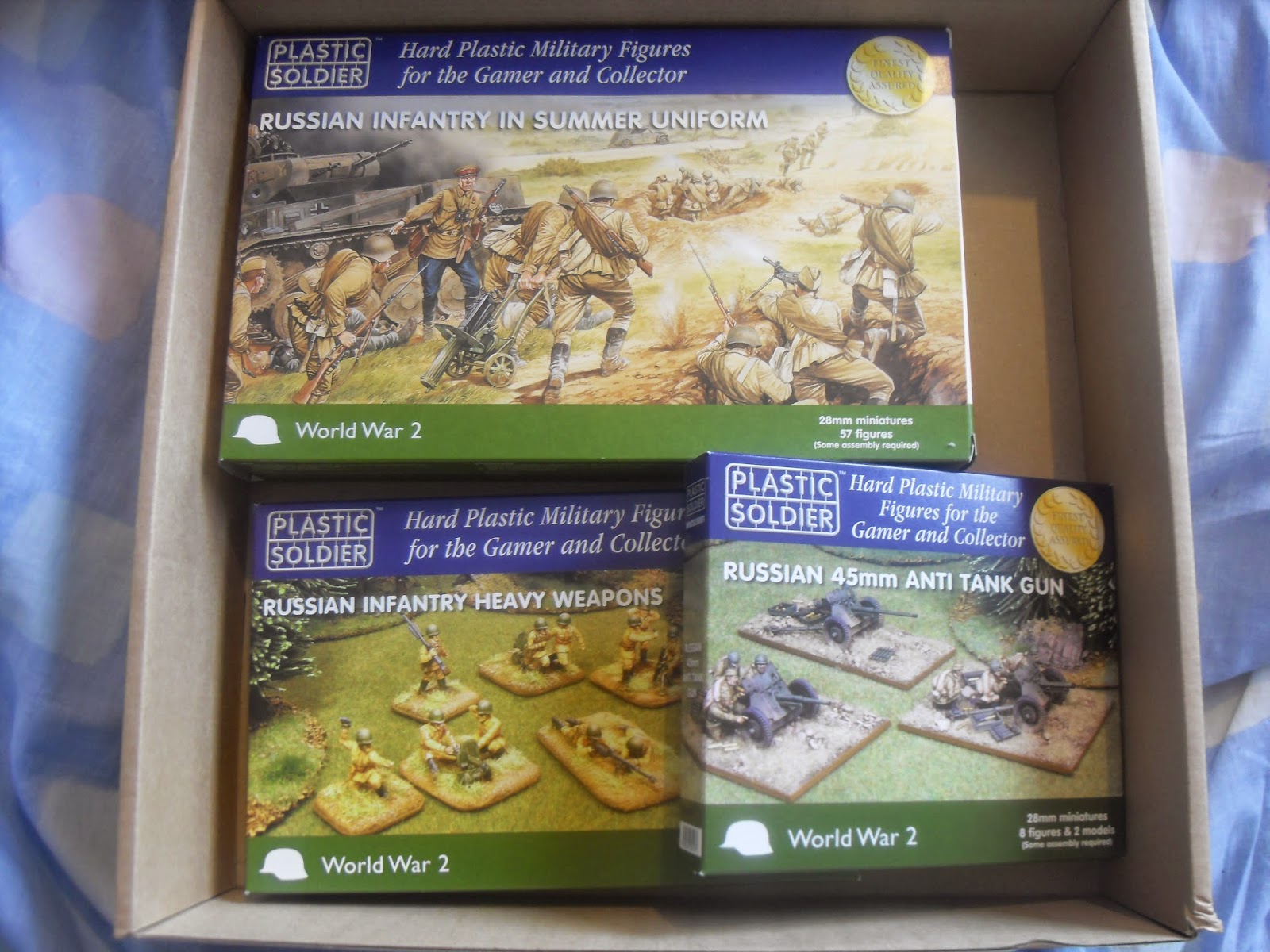 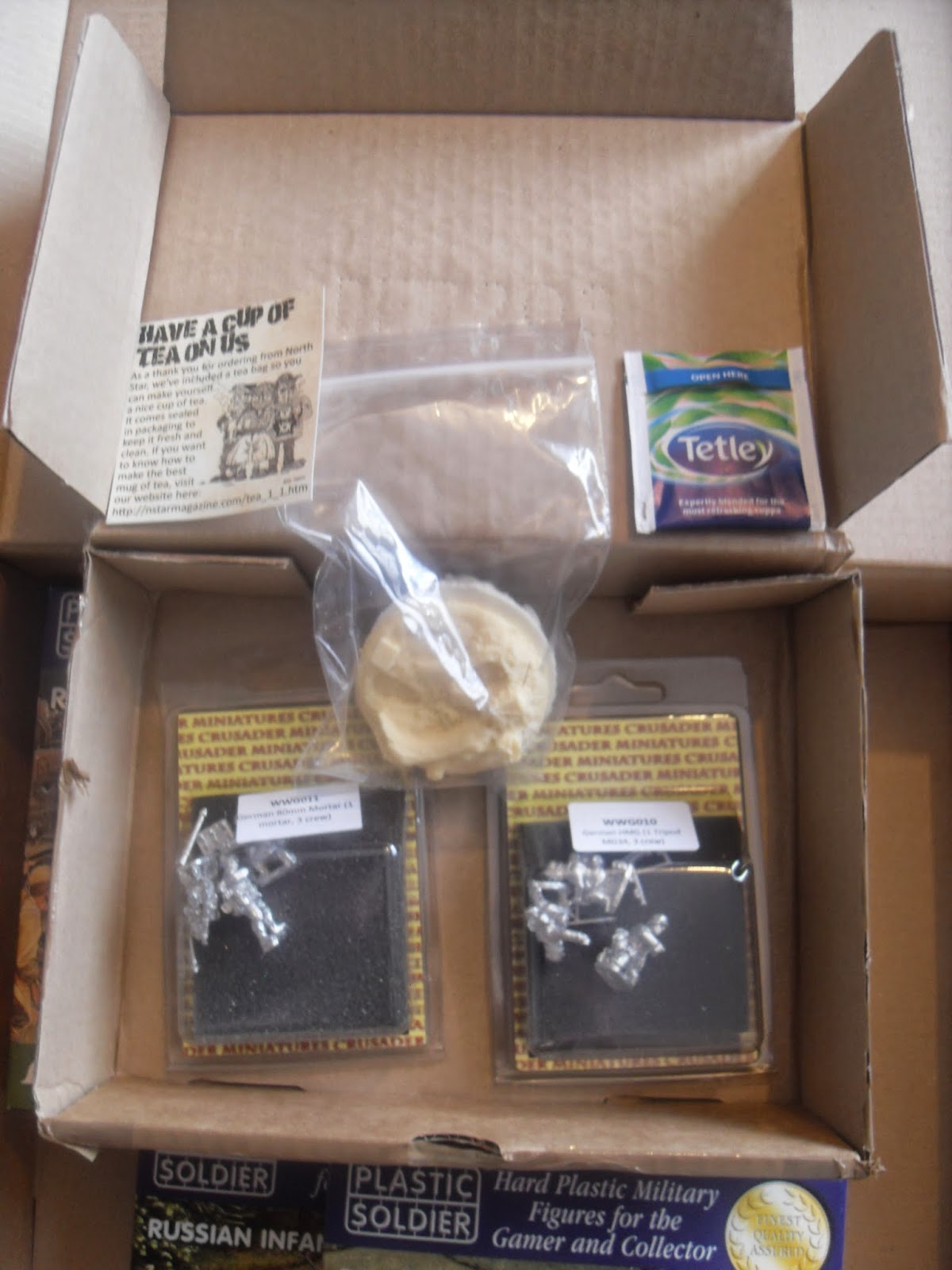 This week has been a total miniature adventure-real life has been put aside (as much as is possible) because I have been reading the Bolt Action rule book and painting furiously at night. (can one paint furiously?).

It was back in the mists of time since I have felt so positive about this hobby, even if I never have a game of bolt action I have been enthused by it's new (to me) turn mechanism and it's simple mechanics, so enthused that I went and purchased some German Warlord infantry to paint. I also ordered a HMG and mortar team from Northstar, it will be nice to see if they mix in...if they do I need a few other bits to complete my infantry. 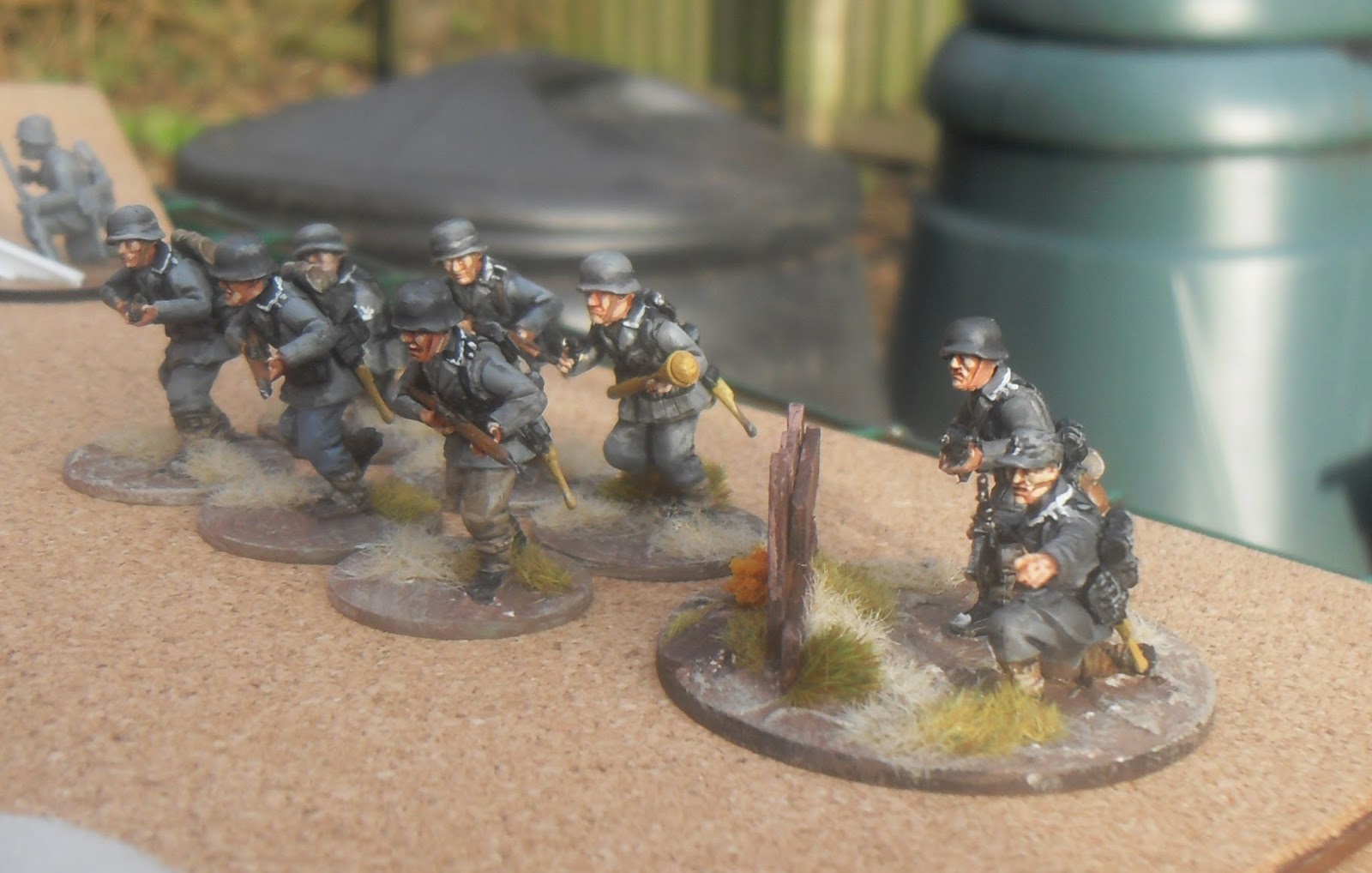 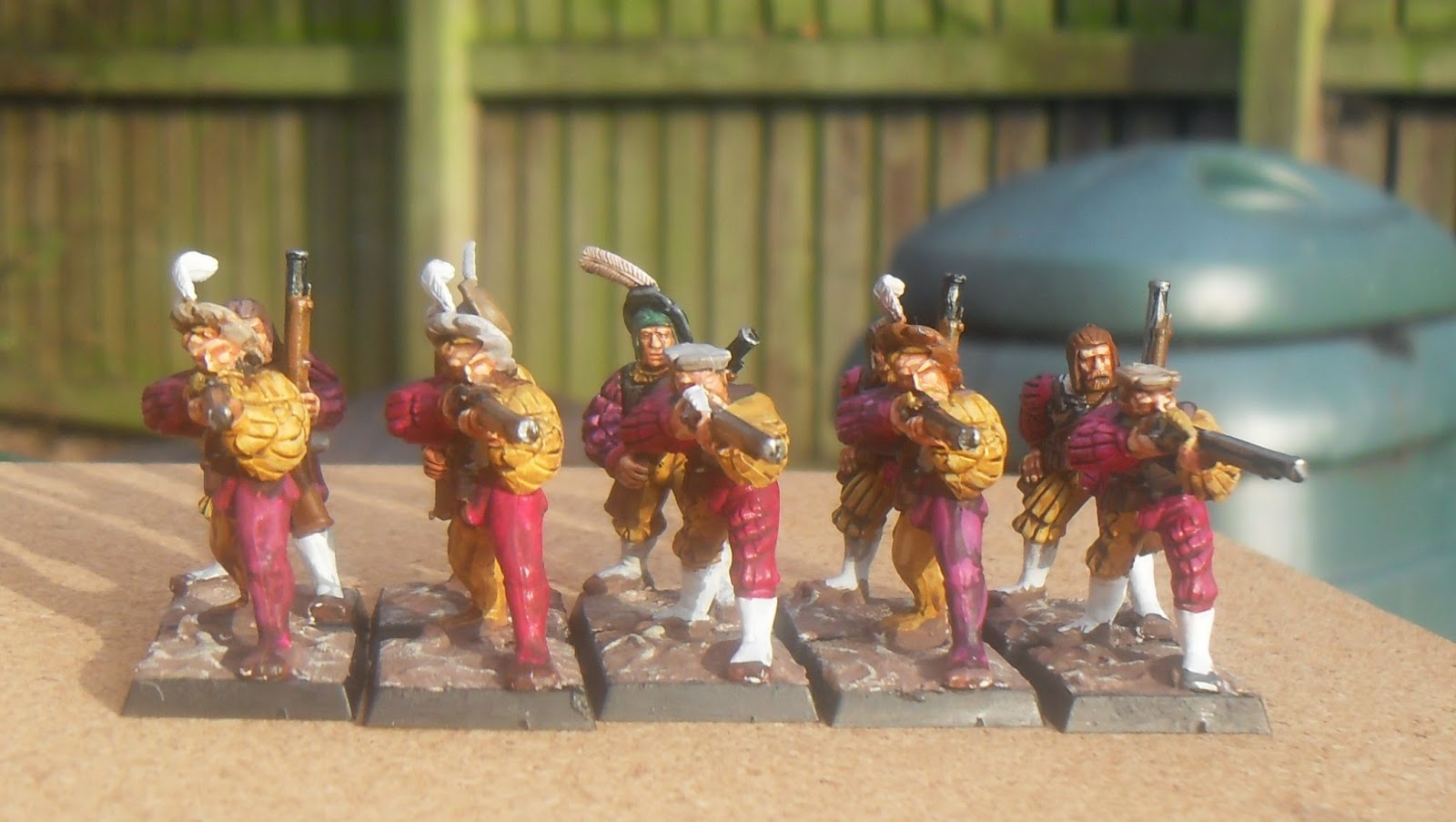 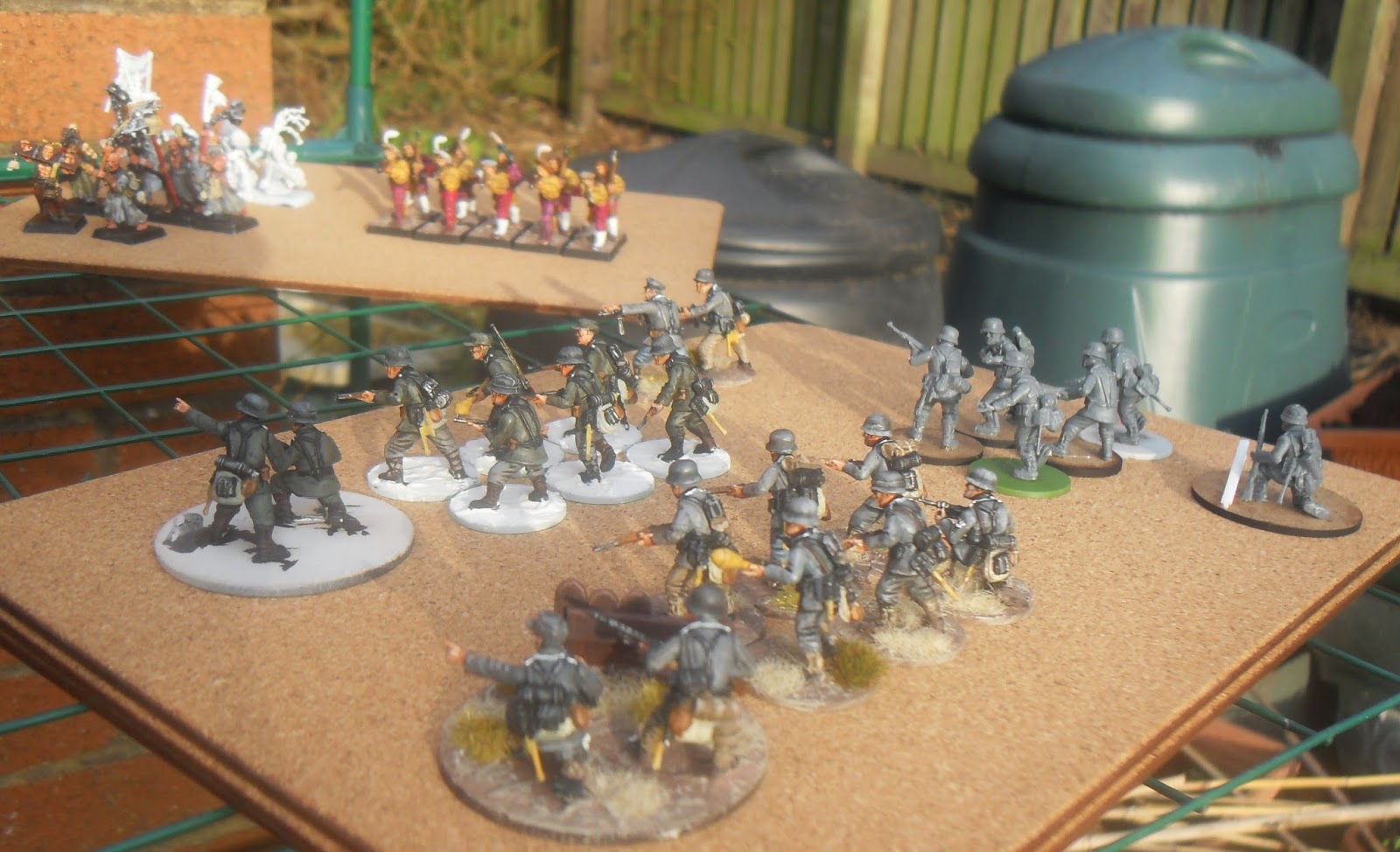 The first German section was painted using Codex Grey as the Vallejo reed green made me dizzy, the second unit are Vallejo German field grey, it was trial and error as you can see. The Imperial tropps were from Ebay, there is another unit waiting to be painted up, they seemed to be a relief from all that grey!

The Russians ill come via The Plastic Soldier Company in the form of an army box-£35 for 57 infantry, HMG's and a couple of artillery pieces!

The future is indeed plastic...

It has been a strange week, having accidentally purchased The Bolt Action rule set on Friday I felt compelled to visit my local model shop to acquire a box of Warlord Games Late War German Infantry. My reasoning was that I could try out the rules in the scale that they seem to have been written for. All was well with my scheme until tonight when I came to paint 4 of the minis, I used Vallejo 920 German uniform colour...it's my own fault.

Usually I paint one figure and make notes in my painting log of the colours I have used (yes I am that boring...the winter nights fly by in my home). Being clever I painted the jackets on four figures assuming that the colour would "settle down" and assume a naturally German army appearance...instead I had four world war two German infantrymen looking like space marines!

Now I have four completed Germans but it was a frustrating experience painting over (twice to get rid of it) the fun colour that masqueraded as a uniform shade. This is just a cautionary tale to gullible who may believe what Vallejo have produced....if I ever meet the guy who named this colour I am going to kick him in the painticles.

On a much more positive note (unless you happen to be my wallet) I saw this today about a range of world war one plastics....my order from Brigade Games never arrived (The Chris Peers Contemptible Little Armies) and I got no response from the email that I sent them so I may hunt down the old Warhammer Historical set if these figures ever get produced.

Have a good week Chaps because we are all special.
Posted by Solo wargaming-on a budget! at 14:59 7 comments:

It is a little strange but most of my figures now seem to be from Games Workshop? As a mostly historical type (or so I thought) I find this puzzling. GW are either Sci Fi or Fantasy and expensive to boot yet they are the only figures (except the odd Reaper) that are on my painting table! I have never played a game of WarHammer 40K yet I have a unit of Terminators awaiting undercoat and WarHammer Fantasy is a mystery to me but I now have a couple of units painted up?

To add to this mystery I have several odd modern military figures and a bunch of Zombie survival types on my shelves....long gone are my thoughts of a Napoleonic army in 28mm, maybe its just easier to paint small numbers of varied troops? The big battles (if they ever happen now) will have to be in 6mm... 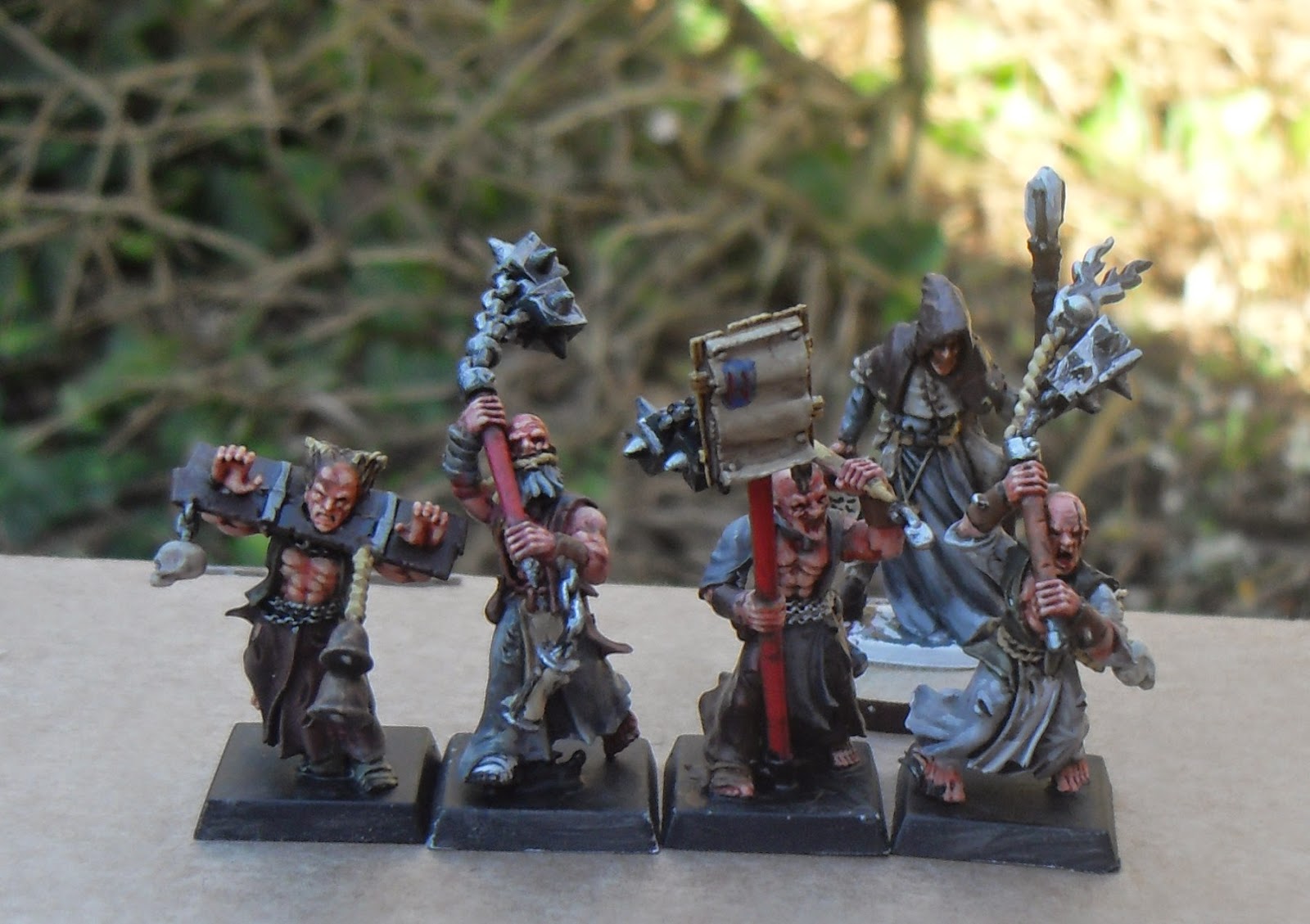 Manchester visit and the next painting season. 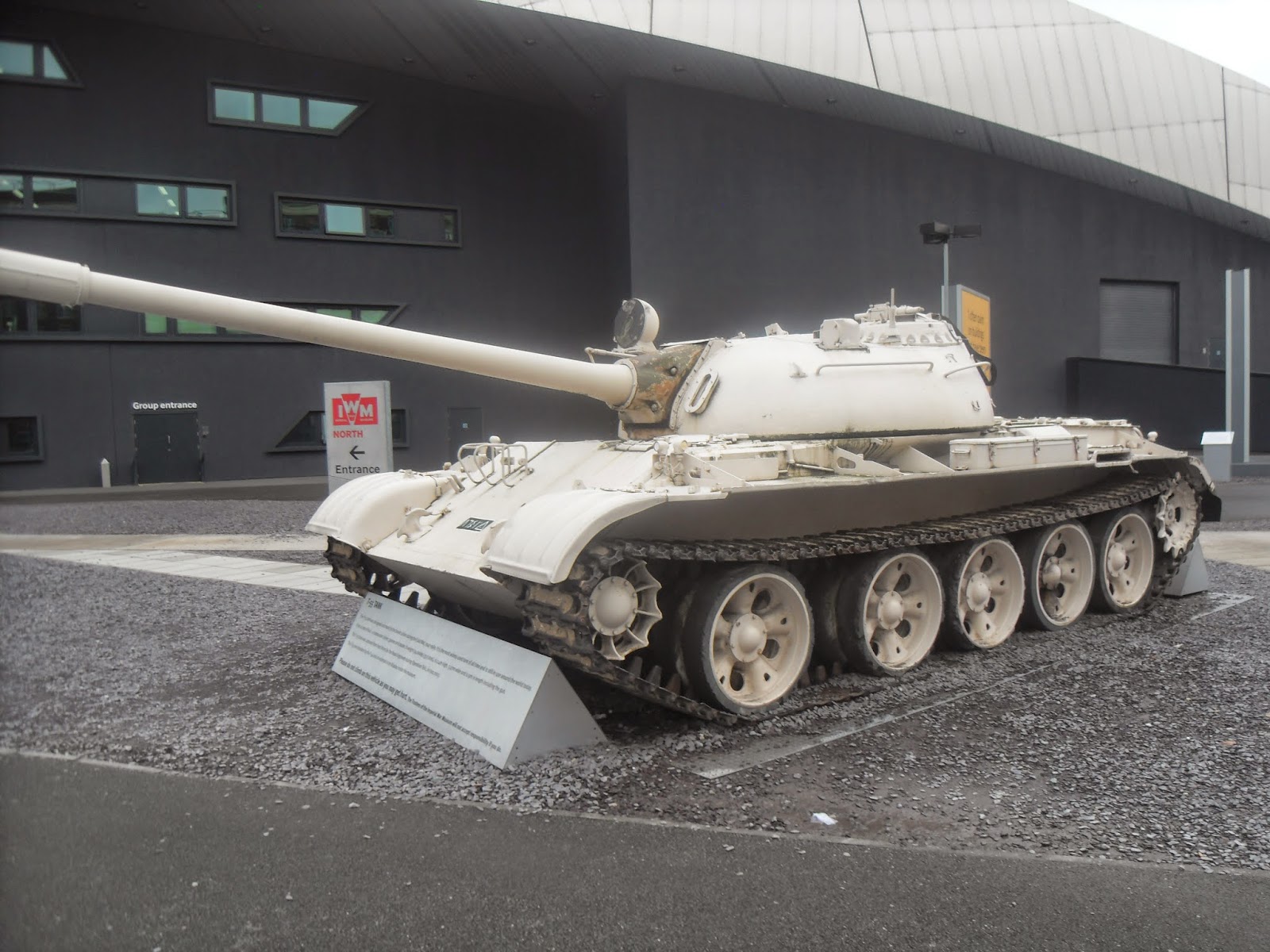 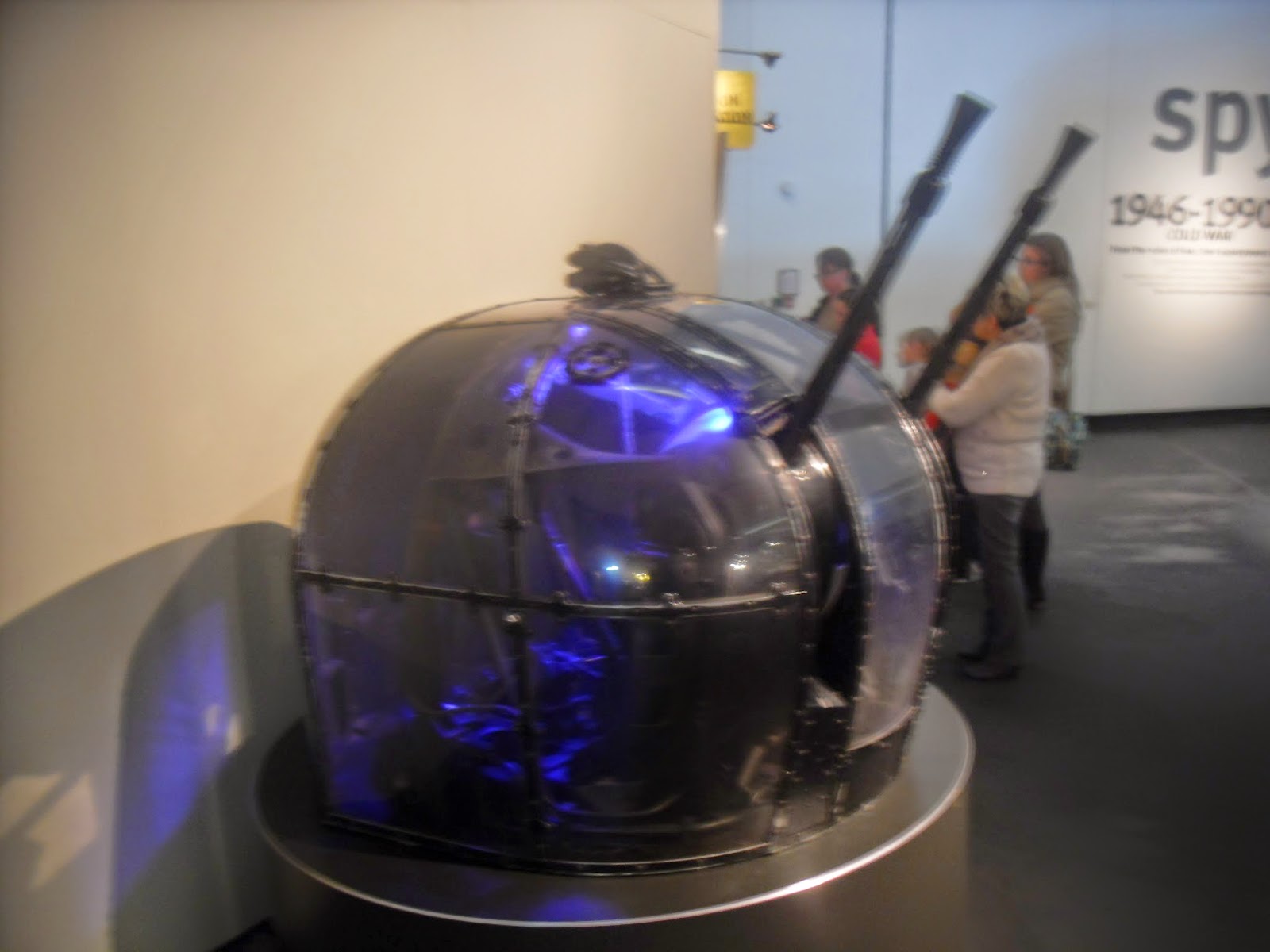 I must apologise for the lack of posts but this summer has been a pain in the proverbial. First off the visit to Thailand which took the wind out of my sails and then more legal delays....excuses over with.

Can anyone ID the aircraft that the rear gun turret is from? I would never have guessed it...I even read its information card twice. The tank is an easy one but I just wanted to put its picture on here...if your ever in Manchester the war museum there is well worth a visit. I did take lots of photographs but the place is dim and my camera was old even before I bought it-my sons I phoney took far better pictures.

As I intend to resume painting soon I have been spending hours online looking for something a little different...what do you chaps think of Mantic games? Are the figures nice enough to paint? They certainly look interesting enough.

Despite being mostly a solo player I may try and find a local club...it may encourage my son away from the Xbox and I may actually play a game against a live opponent. The only club I previously used to attend regularly was Burnley Wargames Club which I have fond memories of...some of their members were amazing artists as well.

Good to be back and it has been good catching up on what you fellows have been doing.