I hope you are all ready for the weekend and have painting and gaming sessions planned? I know that I have a few hours "booked in" at my paint desk in the hope of creating a passable unit or two out of some old GW Empire troops.

Back in the day (probably late 80's or early 90's) I was a "serious" war gamer and only used Games Workshop for their paints and brushes...though I did like the Bretonnians. Anyway despite admiring the Warhamme Empire models they were actually more expensive than my usual war gaming figures so I never actually bought any. Well actually I used to buy the odd figure to paint because they were exceptionally good quality but you get the broad picture.

So now 20 or so years later as I wander around ebay I occasionally come across Bretonnians and Empire from the -I think-5th edition and I do sometimes have the winning bid. 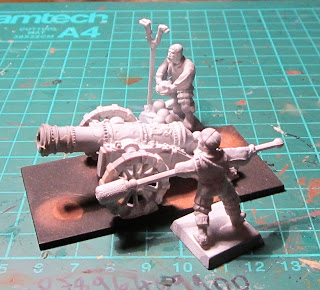 The cannon above was unjustifiable when released new but now as part of a job lot I calculate that it and every figure it came with cost 50p each.....

Obviously these guys have seen better days and some detail has been lost (broken spear heads mainly) but I will rectify or ignore this. The bases are now 25mm round to fit in with my age of Sigmar fad and will tomorrow begin the process of receiving paint in an attempt to give these guys a new lease of life. 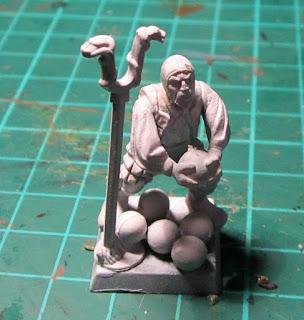 This chap is now stood alone on a 25mm base but the thing next to him is driving me nuts-what is it? It does look like a stand for a rifle but is too high.... 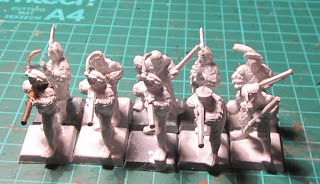 So here are the musket men except now all on round bases, it will be fun to paint these old guys which I think are some of the best sculpts to ever come out of GW.....I knew that if I was patient that I would eventually have an Empire army! That 20 year wait was nothing...nothing I tell you.

Keep blogging Chaps and have a great weekend.

Well today was amazing! I got 2 hours of painting in with t

he door open, sunshine flooding into the room and Mozart on low in the back ground. Also tea....a steady flow of tea. Perfection.

Perfection that is until I came back to my desk and saw the abysmal mess I had made! I like order and my desk was utter chaos! 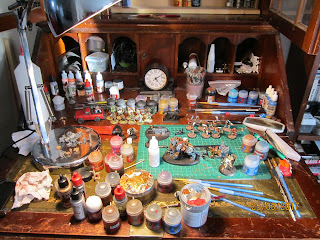 This really is my nightmare...what if the RSM floated by? Nope painting over and quickly start putting what went wrong right again.

Anyway a start was made on the Dragoth thing and at last a unit of flagellants and shooty types for the Empire are 99% done. Age of Sigmar is a great game and I fully intend to play more games of it this year, I may even try a local club.

The African moderns are out of the cabinet to make room and may go on ebay to fund my lust for more fantasy figures. Games Workshop have done everything right for me in the last 12 months so my next purchase will be the Generals Handbook just to read at work.

Keep blogging Chaps you keep me going now from 9 till 5. 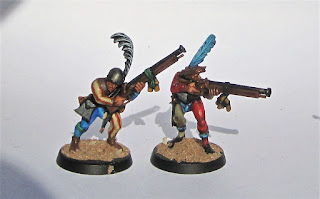 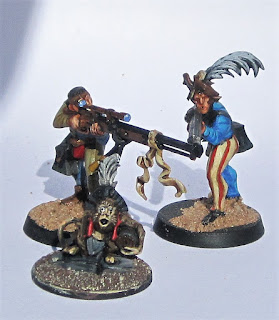 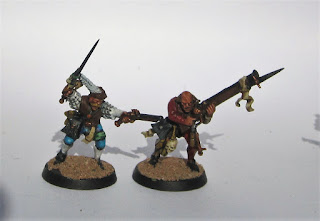 Work in progress Empire troops above....now thankfully completed and awaiting a their standard bearer and officer....they better be good in Sigmar games as these have been ongoing for ages.
Posted by Solo wargaming-on a budget! at 11:11 10 comments:

Well what a year so far! There has been some great releases from Warlord and I have had the opportunity to purchase figures from a couple of my favourite manufacturers and it is still only early March.

This year will finally see me pull the trigger on Age of Sigmar (along with the Generals handbook) and maybe some more moderns. In fact I have a long list of figures that I will actually purchase for that "rainy day". One small problem is that as I get more money to buy figures I get less time to paint....first world of work problems but I am certainly not complaining. (I wish I could do a graph to show this).

I read your mini adventures still-just at work!

Keep Blogging.
Posted by Solo wargaming-on a budget! at 13:51 2 comments:

Well I have managed to kill another camera! No idea what happened but it is no longer of any use so I borrowed the wife's camera for these shots.

The first African militia unit from The Assault Group is finally complete (except for the RPG which I will have to check the colour scheme of). This group was painted in little sessions as I had not planned to do them...I just fitted them in as life allowed. In retrospect I had no need to buy two units and two technicals because the chances of having them all on the table at one time are very slim indeed. 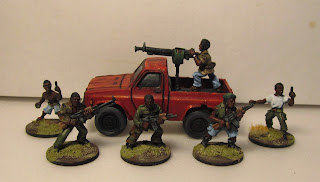 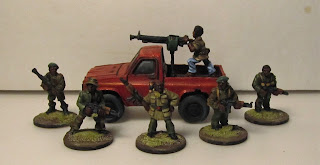 The Assault Group figures are easy to paint even for my old eyes and they should match well with the Copplestone figures that I intend to order when the defence budget is not under intense scrutiny (ie when the wife is not paying attention).

The Arab type "sleazy Abdul" figure and his body guards are also TAG figures and were easy to paint, these figures will find plenty of use if I ever get around to obtaining a board 3 feet or so square.

I do have a pool of modern types that could be described as private military contractors from a number of manufacturers but the chunkiness of TAG are my favourites. Placed next to Empress they look odd but together they have an almost comic book style. 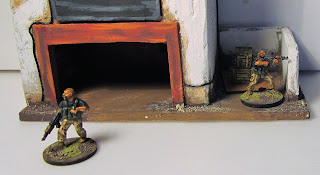 Despite being busy I have used whatever free time I have to quickly paint up some zeds and assemble the motorcycles from "Project Z" from Warlord games. I am so impressed with this game that I will be buying the new Samurai game from Warlord "Test of Honour" which looks very interesting. Initially I was put off by the non traditional use of dice in the Warlord games set but now I am actually enjoying the system and the Samurai system looks very clever indeed.

I am sure that you will have seen it but here is the link anyway. By structuring the game and providing everything needed to start Warlord are helping someone like myself who has no discipline to actually get a game ready to play before being distracted! 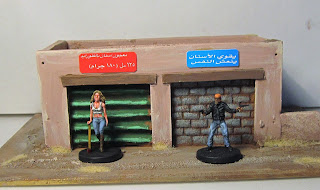 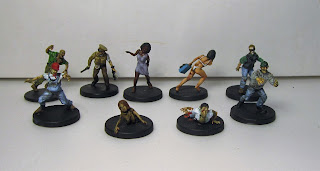 Lastly I found the Czar and his family! Not yet finished but these will be completed and will most probably just sit on my shelves-does anyone else buy figures that they have no actual use for? 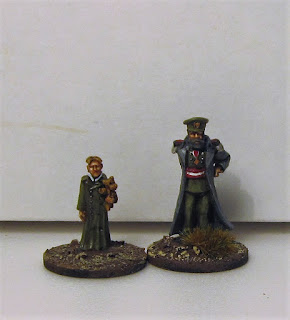 Thanks for popping by Chaps, keep blogging.
Posted by Solo wargaming-on a budget! at 04:40 8 comments: