Do miniatures companies watch each other closely and regard each other as enemies? The release dates for The Gates of Antares and Horus Heresy seem very close and almost deliberate? Without a doubt I will be purchasing some science fiction at the beginning of November but the Horus thing may lose out as its a board game...I still may go for GW though. 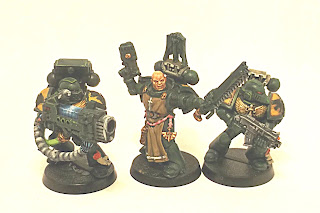 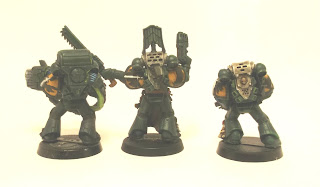 Try as I might I cannot seem to get Space marines right. It is just as well that I buy them relatively cheap off ebay because if I had paid full price I would be annoyed with how they turn out. I have 25 of the little sci fi terrors now and may-just may- be getting used to the awkward little things.

The figures in the photo will get their bases completed tonight along with two command figures, now I need something for them to shoot at, Tau are top of the list.

What would you Chaps go for? A bucket load of Tau and some paint or The Gates of Antares (which would be yet another system to learn and start collecting)?

Finally Osprey Black Ops is on its way to my HQ....this should be very interesting and I will keep you posted.

It had to happen as I am sure it does to all gentlemen at some point or other! I have run out of steam and cannot pick up a brush...

This does happen now and again but I think I know the cause this time. I have just completed a few stands of 1/72 Medieval figures and they are too effective. This has thrown me a little as instead of plugging away at my remaining Bretonnians I have been thinking about the endless possibilities of Strelets plastic figures.

The long awaited release of 30K is almost upon us and though I am not a huge fan of Games Workshop they got Age of Sigmar spot on with the free rules and army lists. I do hope that 30K follows a similar game format because it means that a game is actually playable. If the release is just another Space Hulk type of ploy I may just leave the 40K universe behind (not that I ever invested much in it) and try Gates of Antares or Infinity...suggestions welcome.

My copy of Frostgrave arrived a few weeks ago but has hardly been opened because of those pesky damned plastics but I did complete a few treasure markers...they are a little large but hey.. 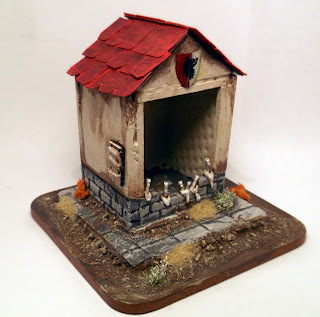 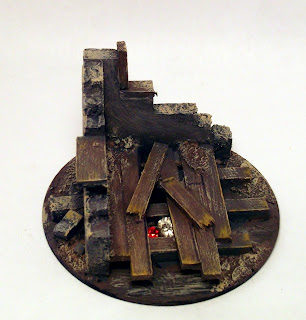 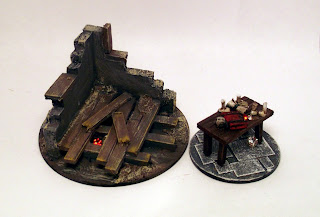 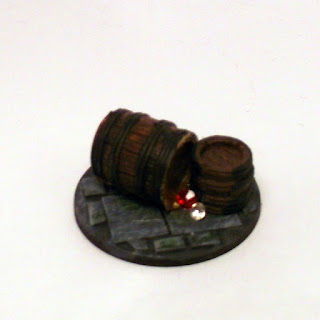 Well I had better go and meditate on what to try next but Peter the Great is looking like a good candidate for some Googling. Maybe if he was interesting enough I will be inspired to build a little plastic army....resale value will be nil as I am not sure that anyone else games Black Powder in 20mm!
Posted by Solo wargaming-on a budget! at 14:02 8 comments:

Its been a productive week mainly because of the weather and things well just dropping right to allow some hobby time.

Hail Caesar is an interesting set of rules that I have had kicking around for some time so I thought I would give it a go with a few games. The only problem is that I do not have any armies! Now 6 mm would have been a sensible option but I have been reading a lot about Strelets and Hat and indeed in the past I have used these figures for a First World War army or two. An hour spent on the Plastic Soldier Review page made it impossible to resist trying a couple of boxes just to see how they would paint up.

Previous experience with plastics and a bit more reading revealed that if you want some of this wobbly shiny goodness you are going to have to be equiped with Bostik, PVA, cutters and a very sharp knife! 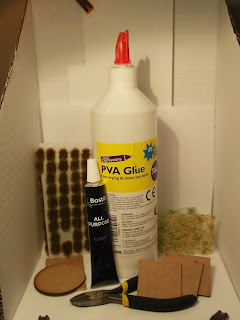 The bases are from Warbases and I chose to use a 40 mm frontage so that I can use DBA 2.2 (I just ordered a set as my original DBA is in Thailand!). The now dated ruleset is still available from Keep Wargaming for £6 delivered...an absolute bargain if like me your defense budget is under pressure.

I primed the figures and painted away and to be honest they were hard going! I have just completed 100 plus Games Workshop miniatures and trying to get used to smaller less well detailed and cast figures is taking a lot of adjustment!

Once completed the figures are coated in PVA (twice actually) this has dried matt and has given the castings some strength. It was like time travel....with no reference to Back to the Future at all. Strelets remind me of Hinchcliffe or Irregular miniatures in the best possible way. Each figure is pretty basic but each is a character which is no mean feat from a box set of mass produced plastic figures. 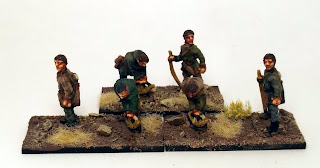 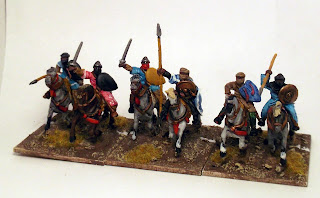 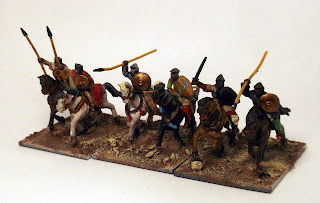 The figures don't really stand up to close scrutiny as you can see but because they are actually rather small they look far cleaner and effective on the tabletop. There are actually a couple more Crusader units completed but not pictured here.

Next up are the Italeri Arab Light Cavalry....because I chose a 40 mm frontage and not 60 mm like I should have I am limited and may have to number or label the bases....but as I only ever play solo or with my son this should not be much of a problem.... 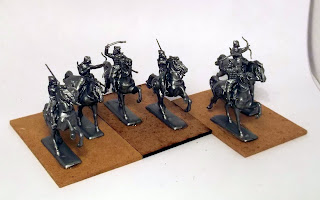 In total I have spent around £30 on figures which should give me two DBA armies or in Hail Caesar terms a division or more for each side. Strelets really are good figures and there are lots of variations in a box so my armies will have the character that I so strive to achieve in 28 mm but so far at only 30% of that cost!

A few sheets of 6mm thick Depron foam are on their way to my location so next week may indeed see the construction of a few buildings. Again my budget has to be taken into acount and this material is the cheapest way to make terrain, it can be easily cut or scored and it takes my household tester pots of paint a treat (let it dry for hours though...).

Good luck Chaps and if anyone else is creating an army in 20 mm plastic I would love a link or two to get some tips.....I wonder what Black Powder is like in this scale?
Posted by Solo wargaming-on a budget! at 14:24 3 comments:

Its been another productive week, more painting due to a cold preventing normal sleep and experiments with a camera.

My photography has been shockingly poor and a trip to Aldi provided me with the jolt I needed to work on this with a free sheet of white cardboard. Back home with the shopping packed away I fashioned the white freebie along with some foam board into a little portable studio. Nothing has been perfected yet but with the aid of Pixlr I am hoping that my photo's will improve....see below. 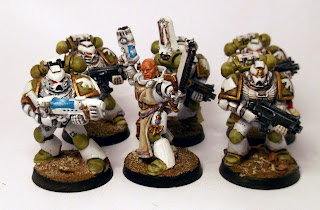 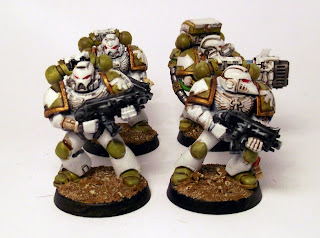 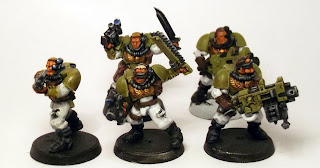 These lads were the first to be immortalised in the new cabinet because they are for the chop via ebay. I did consider buying a few more (I have some on the plastic pile hidden safely from view) but an interesting incident via facebook and some local players changed my mind.

A very nice local Chap offered to give me a game...another offered to punch me in the face if I turned up with either Chinacast (whatever that is) or an out of date codex! I am mightily tempted to find this individual to help him work on his social skills but I feel that I am getting too old to be bothered with the inevitable arrest and court case.....war gaming is it the new alternative to football violence?

Oh well an interesting week indeed! Maybe it is good to game solo?

keep blogging-I need your sanity!!!
Posted by Solo wargaming-on a budget! at 01:41 4 comments:

Its been a busy few weeks here. I have now completed 24 Bretonnian Bowman, 16 Men at Arms, a Strumpet and several Dwarves. The Reaper mini of the female Dwarf on a Polar bear is I feel the most unique of the bunch.

Added to the figure count are four buildings for Frostgrave/AoS and a large ruin for 40K. I am making the most of my free time 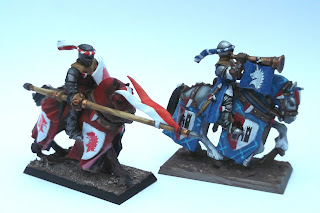 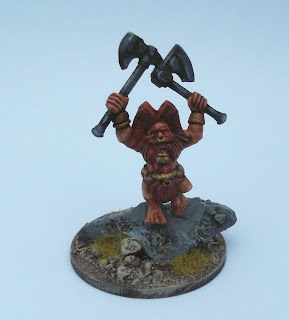 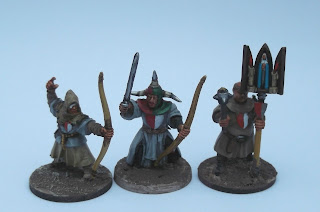 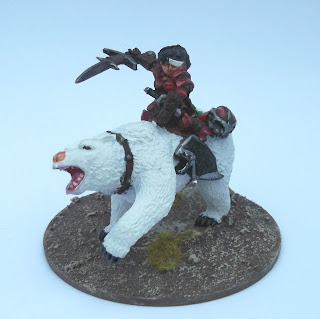 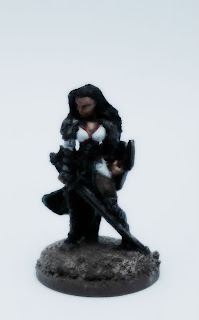 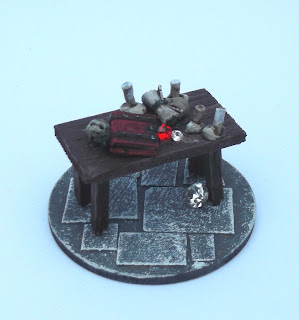 I have constructed a small box to take pictures in and i am currently experimenting with Pixlr.as you can see this is far from perfected but it is a pleasant enough problem to have. The Frostgrave treasure markers are fun to make and the table is just one of four that have been completed so far.

Keep blogging!
Posted by Solo wargaming-on a budget! at 06:02 5 comments:

Email ThisBlogThis!Share to TwitterShare to FacebookShare to Pinterest
Labels: Age of Sigmar

40K to get the Age of Sigmar treatment?

Its been a really busy time here with a Bretonnian army almost completed alongside a dwarven army....both are modest in size but a couple of games using The Age of Sigmar set have been interesting.

Games workshop have been very smart. Free easy rules which do give an enjoyable game in an hour or so along with free army lists means that instead of £30 spent on books they sell more figures. I certainly hope that this business model works out for them, it encouraged me to spend my hobby money with them for the first time in years.

Rumours are abound that 40K will get the same treatment as War Hammer Fantasy and I think that this would be a positive move....how many parents and kids are put off from even starting an army with such a heavy investment in rulesets and codex books?

Well done Games Workshop! (can't believe that I wrote that) What do you Chaps think?

Completely unconnected to any of his is a bit of my local history. Leyland (Saxon for untilled land) was given around 1218 to the knights Templar....god only knows what they thought of or even did with this backwater (only rediscovered by the doomsday project after William audited the country) but they did leave their mark! 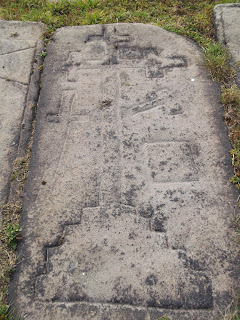 The photo is of a Knights Templar grave marker of which there are around six in my local churchyard, the "tools" of his trade can be clearly seen etched into the stone....one hard dude, both axe and sword!

Keep blogging Chaps coming soon will be some photo's of an Age of Sigmar game complete with new terrain....
Posted by Solo wargaming-on a budget! at 13:01 2 comments: