A Lazy Weekend of Painting

Taking pictures of my minis is starting to drive me nuts. Even using my wifes iPhone with two lamps still produces pants pics.. maybe I am too far away? Anyway if anyone has any tips or can recommend a midi camera to purchase I am all beers..... sorry ears.

Here is what was completed this weekend, 10 chainrasp (guys in bedsheets) 4 mymourn banshees and a handful of zombies from coolminornot. 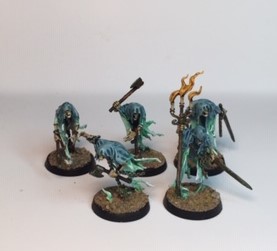 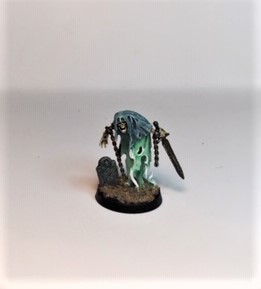 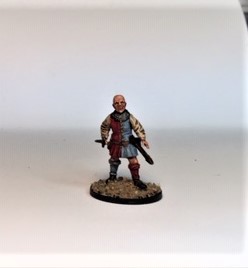 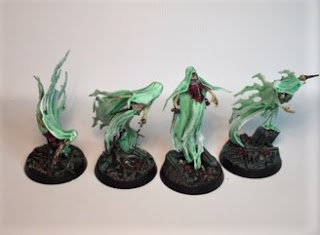 A little hobby time each day

We all experience a busy life and I find it hard to put aside some time for our hobby but this week I deliberately set aside 30-40 minutes after work in an attempt to see what could be done. I have no big plans in mind but I have been inspired by posts on the Lead Adventure Forum (a great site) and so had a go at some colonial Brits.

Mistakes have been made and the first mistake was a black undercoat! Vallejo Khaki grey 880 does not cover black! So I was slowed by having to paint 3 thin coats to even start covering the base coat....
Still progress was made which included assembling 20 models and with enough time to build a cart for scatter terrain and even begin a Battalion HQ building though this may be stuck in a box for some time. 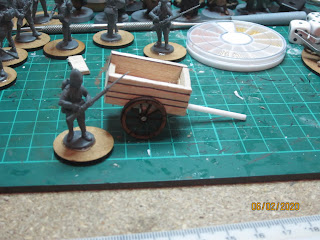 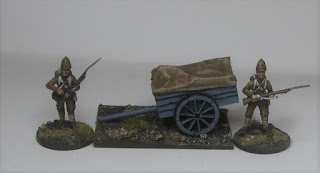 I do envy the people who have a full on love of a period at the moment I am floating around the hobby but I have discovered something strange. Previously I would happily mix manufacturers, especially back in the day-my 20mm Airfix fought alongside Irregular miniatures quite happily... now that makes me shudder! Accidentally I have become a wargaming snob!? Recently I painted some medieval from different manufacturers but they don't match at all... whats going on? Have we all been spoiled or has it always been this way for people?

Oh well I will leave with a pic of the front of my HQ which is as far as I have got... Keep blogging Guys you keep me sane. 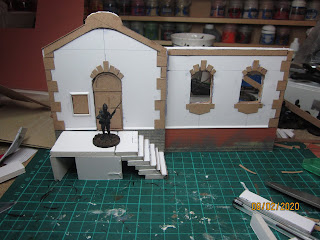 Well we are into February which is usually a busy hobby time for myself but I am experiencing a bit of a lull this year... I have no idea why!  The long winter nights are great for keeping warm around the painting desk or reading a book, maybe it is the mild winter to blame!?

Anyway in an effort to kickstart the years hobby projects I did buy a few boxes of Perry medieval and a stack of different sprues from ebay… as yet I just have a couple of units for Lion Rampant painted and based but I am not getting the urge to do much more with them yet. I am sure that we all have experienced a dip in our devotion to the hobby at some point?

What I did end up with was an unholy desk mess as all the clipping, gluing and parts storage seems to produce a dozen little storage boxes every time I use plastic figures! 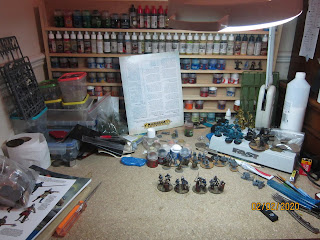 The desk will be cleared ready for the arrival of yet more plastics in the form of Perry Sudan British which will serve in the North West Frontier. Another Dan Mersey book is also on the way and I have had some great help over on the Lead Adventure Forum to try and source a picture of a British cart...

Have fun guys and keep posting.

As Christmas approaches (seasons greetings all) I have been spending very thriftly and my painting fix has arrived via an ebay purchase. After watching a youtube video by Lukes Aps-found here...

I was enthused enough to try and strip paint from plastic minis. Given that one can often buy figures for half price or less on fleabay it had to be worth a shot. So I purchased a bunch of Games Workshop elves and gave them a bath in methylated spirits-I do have a cleaner that probably helped to speed up the process which was painfully easy even for me... 20 minutes tops. 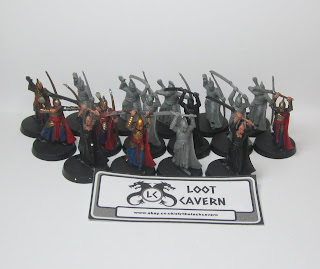 A little paint remained after scrubbing and another dip in the meths would have taken it off but I decided it would not be worth the time and effort. The figures that had been painted had a THICK coat of paint on that I was sure would never move... but it did... 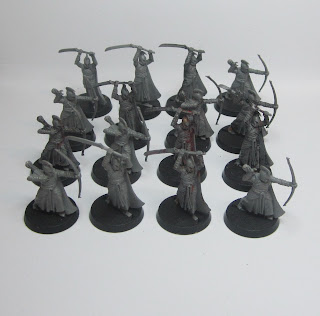 Within 30 minutes of fiddling around I took this picture and 10 minutes later another picture with the undercoat on... despite two swords being broken the figures were very acceptable and ready to take paint. 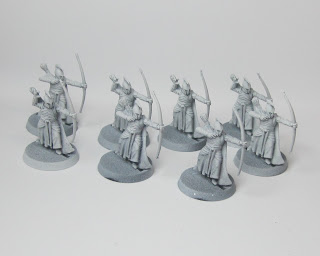 Painting these figures is not really a pleasant experience for me as they are the small side of 28mm which is standard for Perry designed miniatures generally. I do prefer more heroic scale figures as this helps my old eyes but the bowmen are practically done and will work for any games system as Elves. 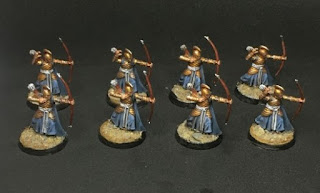 The 16 figures cost just under £8 including delivery, I am not sure how much they would be buying from Games Workshop but I expect probably double that. Two more "sets" have been purchased which total around 40 men of Rohan which will need a chemical bath to prepare them but for less than 50p per figure it is worth the 30 minutes of messing about.

I do recommend buying plastic figures if you are financially challenged (like myself) or if you just want to have a go at painting something different on the cheap it does make sense-the methylated spirits was £1.75 and can be used again and again-do wear gloves if you have any cuts on your fingers though as the meths can sting.

Have a great Christmas everyone.

Games Workshop Back in the Game? Old world returning?

Well I can't complain. I have been lucky enough to have a spare few quid to buy 3 boxes of figures to make a proxy Imperial army for Warhammer and what happens? The day after the last box arrives Games Workshop reveal that they are bringing back the Old World as a separate game system!!

Makes me think that despite waiting a couple of years I was too hasty! So I will send Warlord Games Landsknechts over to my son in Barcelona and keep a box of Perry Mercenaries and Light cavalry in my stash... I had no intention of starting a Wars of the Roses army so if anyone has any GW Imperial Guard (the human looking guys right?) kicking about I would be up for a trade...

Anyway this is what I have been working on the last week or so... 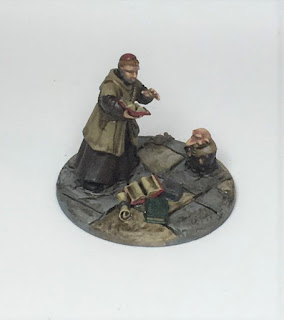 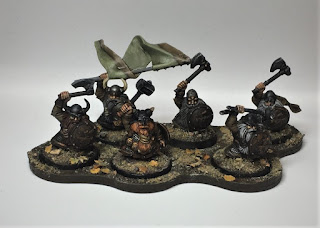 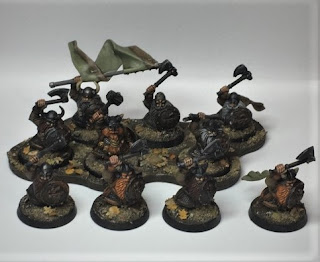 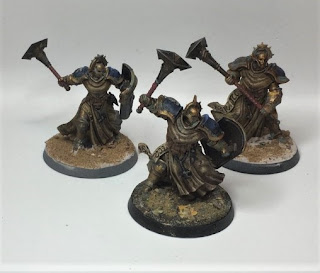 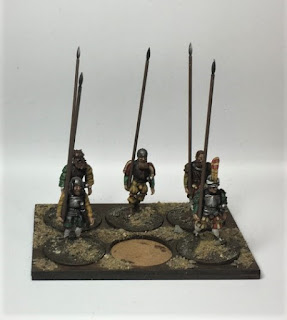 To a certain extent all are a bit of a work in progress as they need a matt varnish and a few things added... the Dwarf flag needs some runes bases need completing. Games Workshop have really put a spanner in the works for what I had planned to do but despite throwing almost £60 at it I am not even cross that the project is now on hold.

So probably back to the Russians unless I can get hold of some Imperial Guard to mess around with. I don't play 40K and the starter box has no appeal for me so I have no idea what they will be used for. I really must see if I can take some pics of my figures as they are on my shelves...

My absence can be explained by the usual life hassles working a 6 day week usually over the weekends... we have all had it. Anyway I have still been painting but still not gaming. I had considered staring a new blog as I pretty much only bother with 28mm due to my aging eyes but thought I would keep updating this until I have worked out which platform to use. 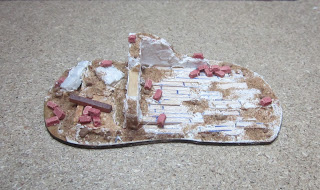 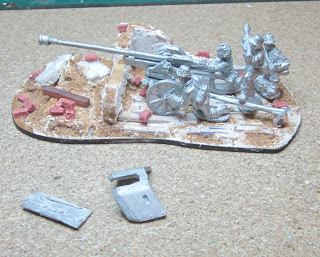 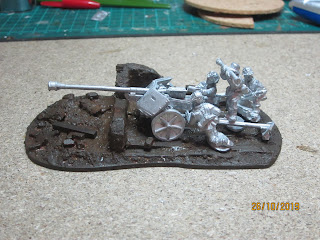 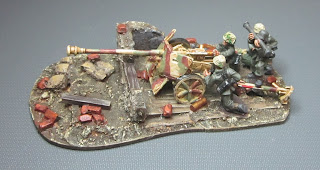 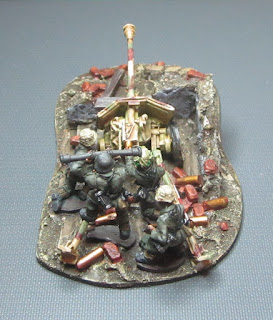 I insanely purchased the winter German boc from Warlord then the Grenadier box which then led to a few other metal and 3d printed stuff... no idea if they will ever see a gaming table. 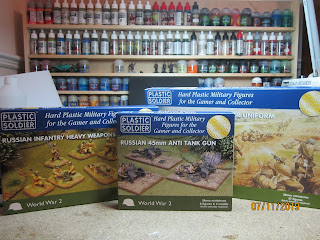 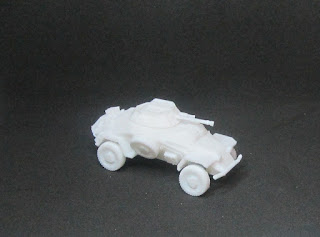 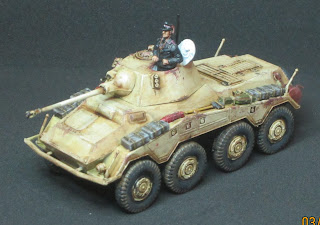 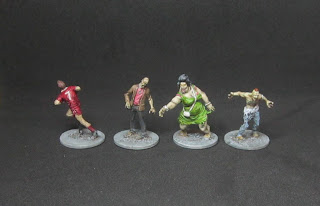 Oh there were some Russians purchased as well as zombies just a distraction. Finally two boxes of Perry Wars of the Roses and a box of Landsknechts from Warlord as well as a few wizards.

So Chaps, plenty to paint but very little time to paint it all in... saving them for my retirement possibly.

What have you all been up to? I have missed you.

It is certainly difficult to update a blog without a computer! My old laptop developed the infuriating habit of randomly deleting files if you attempted to open them! If anyone knows the cure I would be very happy to hear from them as I still have the accursed item. The replacement item is a cheap and cheerful laptop from PC world-but it did come with Microsoft office which made its princely sum of £190 seem a little less eye watering.

Anyway despite the technological hitch I have still been clearing out and have firmly decided to play a few games this year. Bolt Action in 15MM is looking the favourite as I had ignored this scale until seeing the Battlefront and Plastic Soldier Company figures in the flesh. They are so effective and "armies" for this system become very affordable.

My recent obsession with 15MM has caused me to scratch build a couple of African buildings and accidentally purchase a large (for me) group of modern figures and the pdf for AK 47 which upon re reading does indeed deserve its cult status. I am keeping those away from the painting table for the moment, I want to savour painting those little guys and will watch some appropriate movies beforehand. 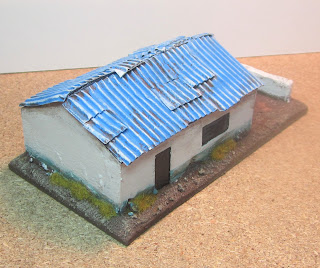 I do want to keep painting 28MM but I am undecided on what period... Black Powder looks like a great game to play I just need to resist the urge to buy 6MM as my collection is shrinking in size and not number. 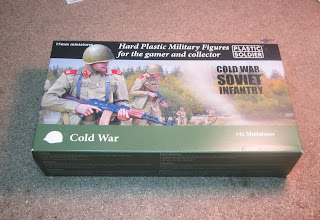 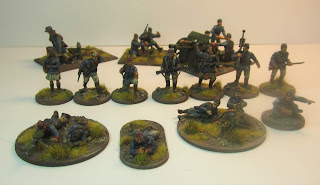 The unit of troops and cannon above are currently on ebay…. I made the artillery from scratch and have purchased more mdf wheels so that I can make a battery for some 28mm WW1 Brits
which have waited patiently on my to do list for a long long time.